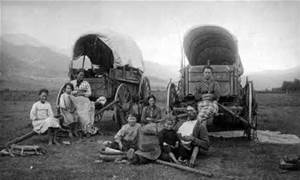 Keeping on the travel theme, my husband and I had reason to strike out for California last weekend, and if ever there were a journey that begs reflection upon the way travel has changed over time, it is the trip from the East to the West Coast of the United States.

We went by air and though the dawn was dismal and rainy in the East, when the clouds finally parted somewhere over Iowa, we beheld spread out below us a sun-drenched green-and-gold carpet of endless squares of farmland. Further west, we gazed down upon the gray and white peaks of the Rockies and as we flew on toward the Pacific, it was impossible not to think of the pioneers in their wagon trains struggling for months across the vastness of the continent beneath us, succumbing to its perils or triumphing over its challenges, while we, sipping cool drinks and reading novels, our only discomfort a slight air-plane dehydration, slipped down over the Bay and onto the tarmac of San Francisco Airport after a mere five-and-a-half hours of flight.

Now I have to say that whenever I’m in California, I think a lot about earthquakes. I know this is tedious and uncool and I don’t say anything to the Californians about it because I know they’re sick and tired of people always bringing that earthquake thing up, but even though I keep my mouth shut, I still think about them most of the time. What would we do if the big one struck while we were there? Where would we go? Would I be able to get a call out back East to tell them I wouldn’t be in school on Tuesday?

The Californians, of course, live with the fact of earthquakes. Reminders are everywhere and no one much bothers themselves about it. There are evacuation zones right next to the winery you just drank a pleasant glass of Chardonnay in and my sister told me she’s some kind of evacuation drill warden at her job. She didn’t think this was a particularly interesting fact, just one of the everyday things that belong to the experience of living in California.

She was far more interested in talking about the problem of water, or the lack of it. California is in its third year of drought. The Livermore hills already in May are burnt the sere brown of late summer in Southern Spain (another place with water issues). Water prices have been hiked and hiked again and the water company has told their customers that each family needs to cut back on its water usage by 20%. This basically means the lawns don’t get watered every day, or in some cases any day though my sister told me people still “sneak water” in the middle of the night.

People are going to start moving away, she predicted, because they aren’t going to able to afford the rising water prices.

I suddenly felt a lot better about that rain-soaked drive to Newark Airport at 4 in the morning. Thank God I lived in the East, I thought, where we have plenty of water and there weren’t multiple fault lines running under our house.

Later, however, at the event we had come to California to attend, I found all the waterless people living over deadly fault lines not much worried about any of that, but instead full of pity and concern for us and the winter we had just come through back East. How can you stand it, they asked? All that snow and ice, one storm after the next. It was why so many of them had moved out to California in the first place. It seems that your neighbor’s natural or weather disaster always seems worse than your own. Too bad there were no attendees from the Mid-west or we could all have consoled them about their deadly tornadoes.

Now this leads me to something about the vaunted California climate, at least the climate around the Bay Area, that I’m not particularly fond of. The fact is I’m cold most of the time I’m there. There’s no humidity and a permanent, cool breeze coming in off the Pacific or out of the Central Valley. The fact is as soon as the sun goes behind a cloud, it’s chilly. Only in San Francisco can you go out to read a book on a sunny patio and be cold and hot and then cold again before you even get through the first paragraph. Remember how Clint Eastwood always had a jacket on in all those Dirty Harry movies? Well, there was a reason for that.

Back in the East when it’s chilly in the mornings, I turn the heat on, but what’s the point of doing that in California when even though it’s 57° in the morning, it’s going to be 84° by lunchtime? As I stood on the icy hotel bathroom tiles, shivering after a (too-long, very wasteful) hot shower, it occurred to me that it would be a good idea if next time when I came to San Francisco I packed thermal socks in addition to woolly sweaters.

If you really want to be chilly, however, drive over the Coastal Range to the Pacific. Friends of ours who live on the Peninsula in Half Moon Bay told us the temperature range there was . . . 58°. In the summer, when the cool air from the Pacific hits the warmth of the American landmass, a perpetual cloud bank forms over the coast. People flee inland and only come back when the summer is over.

“You can tell the golfers who aren’t from around here,” our host said to me with a wry smile as we stared out at the tee next to his house, “they’re the ones wearing shorts.”

So it’s freezing, there’s no water, and an earthquake could strike at any moment. So why are so many people living there? Why aren’t they fleeing to the wet, more-or-less earthquake-free East?

Because the Bay Area, despite these very real woes, is still pretty darn impressive. It does really get hot by lunchtime, every day. The sun really does shine, when it’s not behind a cloud, all the time. You can plan events year-round without worrying about the weather. Your schools are never cancelled for snow and your commute is never a miserable, potentially life-threatening battle with the freezing elements. The Pacific, though not warm, is stupendous and the Coastal Mountain Range a lovely series of pine and eucalyptus-clad hills. You are surrounded by wineries and the relaxed hospitality that goes with them. You feel like you’re in another country, a country that might be somewhere in Southern Europe. You are beguiled by the ease of living there, despite everything you know about the big one looming in the not-too-distant future and the drying California climate.

But could I live there? Of course, I could. I’ve lived many places and learned that you can live anywhere. But the fact is I, gulp, like winter. I don’t much like driving in sleet and freezing rain, or shoveling, but I like to watch the snow fall and soften the contours of the land. I like to lie in front of the fire with my husband and my cat. I like to put on my long winter coats and fur hats. I like having a season in which one can draw into oneself, a quiet time, if you will, a time for reflection. You appreciate the easier seasons so much more when they do come. You drink in the green and wallow in the softer air, knowing it’s only going to last four or five months.

They say you get what you pay for and we do pay here in the East. We pay and pay again for the beauty of our spring and summer months, but we love them, these fleeting weeks, we love them, like the child whose birth was the most difficult, so much more for that.

← Arrivals and Departures
They Flew Through The Air →