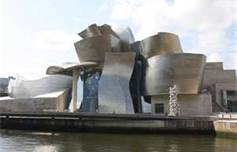 The Helsinki City Council has finally decided. No Guggenheim for them, thank you very much. The city of Helsinki, chosen over Taipei, Rio de Janeiro and Guadalajara to join the ranks of existing and planned Guggenheims in New York, Venice, Bilbao, Berlin and Dubai, decided in the end that they just didn’t have the stomach for it.

International cutting-edge art is expensive, and Europe’s in recession. Although Finland is one of the few countries left in the EC not to have lost its triple A rating, there is still real economic pain abroad in the land. People have been laid off. Companies have closed their doors. The government is cutting funding for health care, education and –ahem- local Finnish art museums.

So, it didn’t sit too well with the Finns that the Guggenheim feasibility study alone cost the city of Helsinki over a million Euros. The next stages of the project, were they to go ahead, had been estimated at over five million Euros. And you know how it is. It always costs more than the estimates.

The Finns have a history of living within their means. They were the only country to pay back their World War One war debt to the United States. They dug deep and paid back the Russian war reparations after the Second World War. They’ve become the wealthy country they are only relatively recently. Many Finns still think poor.

But that wasn’t the only reason the Finns were against the idea of a Helsinki Guggenheim. Most local Finnish artists came out against it. It was felt that the Guggenheim would be sure to go in for the big international names and neglect home-grown talent. It was felt that there already were several excellent art, design and architectural museums in Helsinki and just maybe the vast sums of money needed for the Guggenheim project could be used to support them instead.

Seventy-five percent of the Finnish population was against it (according to a March poll) and thought the money would be better used to build a new library in Helsinki.

And even the politicians were against it in the end, or many of them anyway. The Green Party was against it. So, too, were the Social Democrats, the left Alliance and even the far right-wing True Finn Party. Only the National Coalition and the Swedish People’s Party supported it.

After the fact it was going to be exorbitant, the main reason everyone was against it was that it wasn’t going to be controlled by Finns. There was a lot of suspicion of American motives. The Finns have always been leery of foreigners coming into their country and taking things over.

And can you really blame them? In addition to having a history of having to live within their means, the Finns also have a history of not being in control of their own destiny. For 600 years, they were a colony of the Swedish Empire (when there was such a thing), and for the next 100, they were a grand duchy of the Russian one. Though compared to the way subject peoples were treated in the African, Asian and South American colonies of the European powers, the Finns didn’t have it so bad, the Finns don’t necessarily see it that way. No one likes it when someone else is telling them what to do. No one likes it when they’re treated as inferior.

And even after Independence, the Finns could never really relax, not with Russia right next door. So, it’s true, and regrettable, but there is a lot of anti-foreign sentiment in the country, and this, coupled with a healthy desire not to bankrupt themselves was enough to put a stop to the project.

The director of the Guggenheim, Richard Armstrong ,  wants to wait until the upcoming October Helsinki municipal elections and try to push the project through again. He feels that there might be enough of a change in the political make-up of the Helsinki City Council to get the Guggenheim museum a yes vote. After all, the rejection vote was 8-7. Hardly a unanimous decision.

So who knows? There may just be a Bilbao on the Baltic after all. We’ll have to wait until the fall to see.