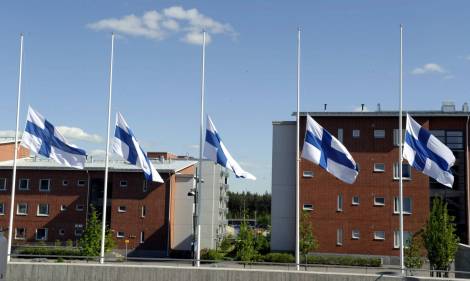 There was a time nearly a hundred years ago when Finns did shoot at other Finns. Depending on who you speak to, this period of time was called either the Finnish Civil War or the War for Finnish Independence. It occurred in 1917±1918 when the country of Finland finally severed itself from Russia to whom it had belonged for over 100 years.

Finns took sides in this conflict. Many of the Finnish workers supported what was happening in Russia and wanted the same thing to happen in Finland, too. They were the so-called Reds. The Whites wanted Finland to be completely independent of Russia and for social and industrial conditions to go on much as they had before. The Red side had some help from the Russians, and the Whites somewhat less help from Germany, but the fighting was bitter, fueled by a clash of ideologies, and what we would today call atrocities were perpetrated by both sides.

By the time I made it to Finland in the 1980’s, all this was ancient history. The seminal event in those days for all Finns forty and up remained the two wars Finland had fought against Russia in the period 1939-1941. Forty year olds in the 1980’s still remembered the Russian bombs falling on them or the German troops who had burned Lappish farms as they retreated across northern Finland. They remembered having to refugee west from the province of Karelia which had to be ceded to Russia as part of the peace negotiations. They remembered people who had fought and died.  Forty year olds spoke about these things to their children and even if many of their children were bored to death by all the old stories, they still served to foster a certain sense of solidarity in the population, of consensus about who and what Finns were. Even if this consensus sometimes made me sigh (it was very nationalistic and often negative), it was consensus all the same. Certainly, no Finns were thinking about shooting their fellow Finns.

But those who were forty in the early 80’s are 70 now and nearly two generations have grown up since then. The Cold War is over and Finland mainly does business with the Russians nowadays. The property market in Eastern Finland alone is fueled by Russians buying up land to build their summer dachas. “Just like a hundred years ago.” The old enemy has become a neighbor. And this is all certainly a good thing.

But maybe Russia’s no longer being a serious adversary has left a gap in the psyche of some Finns, in particular the young Finnish males hovering around twenty who since 2007 have been steadily providing the world with gruesome headlines of senseless shootings. While just this last week, another shooting occurred at a disco in the town of Hyvinkää, 30 miles north of Helsinki.

An 18-year-old was out with friends, went home, got a gun out of his parents’ gun closet, went back to town and started shooting indiscriminately. No particular reason that anyone could discern, no strange, messianic ideology like Breivik in Norway, nothing, just a vacuum of apparent alienation that the boy decided to fill with senseless violence.

This last week, I’ve been reading a lot of explanations for what has happened in Hyvinkää. Finland, after the USA, Yemen and Switzerland, has the highest gun ownership rate in the world. A 15 year old could obtain a handgun license until in 2011 this law was changed to 20 years old with proof of sporting club or hunting involvement. Hunting and shooting are very popular sports in Finland. But all of that was true when I lived there and no one was shooting anyone for no reason.

I do think is has something to do with the gap left in the Finnish psyche from moving away from some of the old definitions of Finnishness. And what, for young people, has filled this gap? Prosperity, and the boredom that comes with it. And just a little too much technology, perhaps. A deluge of questionable information. The chance to become an immediate celebrity by perpetrating a senseless act of violence.

The young shooter in Hyvinkää has as yet to give a reason for his actions. The other shooters were short on explanations as well. And I can imagine some crusty old timers thinking nostalgically back to the good old bad old days when times in Finland were tougher and people were poorer, but when at least Finns knew who they shooting at and why.