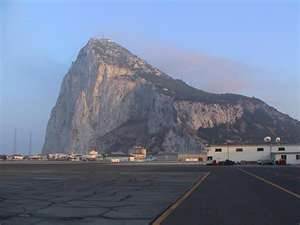 “Whatever you do, don’t go to Gibraltar.”

This was what our friends and neighbors down on the Costa del Sol would always tell us when my husband and I were trying to come up with an interesting overnight trip from where we were in San Pedro.  Gibraltar, though its massive outcrop rose impressively from out of the heat haze that hung over the Spanish coast to our south, was considered to be a cheap and nasty destination, an unfortunate stopover on the cruise circuit for duty-free goods and some touristy photos of the apes. Not worth the drive. Certainly not worth waiting to cross the border.

A piece of advice the British Royal family might want to think about taking. The Spanish are still a bit testy about Gibraltar, still testy that they haven’t managed to get that piece of rocky real estate sitting at the mouth of the Mediterranean back. Tony Blair did try to give it to them when he was Prime Minister in 2002, but when the Gibraltarians had a referendum about it, they voted 98-2% to remain part of the United Kingdom. And even Tony Blair, dedicated European that he was, couldn’t go against a vote like that, now could he?

But if they can’t give it back, maybe the Royal Family could stop sending people down to visit so much. For every time they do, even though the Brits have ruled there since 1713, the Spanish get their noses out of joint. In 1981, when Charles and Diana got married and were supposed to stop over in Gibraltar on their honeymoon, the Spanish royals boycotted the royal wedding. And again, in 2009 when Princess Anne popped by, there were mutterings. Finally, as part of the festivities to mark Queen Elizabeth’s Golden Jubilee this year, Prince Edward and the Countess of Wessex are scheduled to visit in June. Could you really expect the Spanish Queen to travel up to London to tea after that?

But I guess it’s hard to stay away from Gibraltar. After all, in the end we couldn’t either. When it looked like we were going to sell the Spanish apartment, we decided that we should go over at least once before we quit the southern Spanish coast for good. And so we drove the 50 or so miles it was from San Pedro.

As you drive south along the Spanish coast and come closer to it, Gibraltar actually disappears from view, hidden behind the rocky folds of land. It is only when you make the turning off the highway and drive part of the way through La Linea de Conception, the town built just north of the Rock on the Spanish mainland,  that Gibraltar appears again, abruptly, rising up out of the waters of the Mediterranean before you like some vengeful God. Frankly, it takes your breath away.

La Linea itself is not a beautiful town. It’s tired and run down and it’s ringed by petrochemical refineries whose odorous vapors blow south over the stubborn Gibraltarians as they go about their patriotic business of selling cheap booze and T-shirts to tourists of the not-so-well-healed variety. These petrochemical facilities, some say, were built on purpose, their gusts of noxious smells sent like the salvos of the old Spanish guns that periodically fired into Gibraltar during its many sieges.

We stayed at The Rock Hotel which is supposed to be a four star hotel, but whose stars are a bit faded these days. We did have a sherry and a whiskey waiting in our room when we got there and I did quite like the rubber ducky in the bathtub and the full English breakfast the next morning, but otherwise The Rock was a bit languid, a trifle tired. Like the Alameda Gardens across the way, full of captured cannon from long-forgotten battles and plants that badly needed watering.

We did like the top of the Rock immensely, however: St. Michael’s Cave and all the tunnels. Anyone who has even the tiniest interest in history should go at least once to see them. We loved the clouds of birds careening around the jagged cliffs of the rocky monolith. We also found the apes pretty amusing and sat peacefully next to two of them for an hour or so in the late afternoon sun looking out over the Bay of Gibraltar.

My husband, who is a Rotarian, attended a Rotary meeting at the Rock Hotel while we were there and as a result the local Rotarians took us under their wing. We had dinner down in the town in a pleasant little bistro long after all the tourists had cleared the streets and we got to hear quite a bit about the unique life that makes up Gibraltar from mess dinners to High Street concerns to international finance.  Some of the Rotarians we met came from families that had been in the colony for thirteen generations.

None of them wanted to be Spanish citizens.

If I were the government of Great Britain, I would just hold on to it. After all, Gibraltar is actually pretty cool. So cool, my husband and I went back a second time.  And we went out to dinner with the Rotarians again and had an ape sit on our balcony and amiably pose for photos. We also drove out to the Europa Point Light House and I stood with the Ibrahim-al-Ibrahim Mosque and the Shrine of Our Lady of Europe behind me and while my husband took photos was buffeted by the most unrelenting and marvelous gusts of wind I’d ever experienced. And with my arms flung out to either side, like Julie Andrews on top of an Austrian cliff, I watched the shipping of the world pass through the Pillars of Hercules and I reflected upon the fact that for thousands of years, this spot, for Europeans, was both the end and the beginning of the known world. Then, I looked across the Strait of Gibraltar to Ceuta and the Rif Mountains of Morocco and thought about the Muslim Conquest of Spain in 712 that had started at Gibraltar, the knowledge of the ancient world that came with it and the great cities of Cordoba and Granada that had risen as a result and I couldn’t help but feel that I was at an important spot on the globe, where things that really mattered had taken place.

Actually, I think maybe everyone should go to Gibraltar, Royals and non-Royals alike.