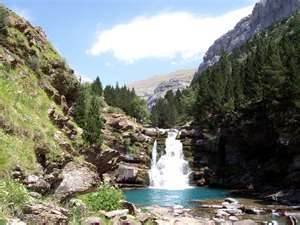 There are fires to the east of us in Catalonia after one of the driest winters on record in the Pyrenees and two days ago the government of Spain banned the short selling of shares for three months in an attempt to stabilize the falling markets. Germany’s sacrosanct AAA rating is being threatened due to fresh worries that Spain might need a full-fledged bailout from the European Community.

But up here in the Aragonese Pyrenees in the valley of Broto, just south of France, you wouldn’t know about any of it. The mountains rise majestically above you as they have for millennium, impervious to the follies of governments, banks and individuals alike. The mountain towns and villages look much as they did 100 years ago when Lucien Briet made this valley and the nearby Ordesa famous with his writings and photographs. It’s said that they looked the same for hundreds of years before that as well. The tourists are out hiking shepherd’s paths that have existed for hundreds, possibly thousands, of years, local children are down swimming in the river, restaurants are open and doing business. Whatever could be wrong?

It is true that the region of Aragon, along with many of the other northernmost regions of Spain, is in better financial shape than others. Andalucia, for example, in the extreme south, is one region that has gotten itself into a dreadful pickle. It over-borrowed and over-built and, quite frankly, anyone who went there could see what was coming. When we vacationed on the Costa del Sol in Andalucia not too many years ago, it was a running joke that the Spanish national bird had become the crane because in every direction above every village and town hovered not one, not two, but countless construction cranes. Now I know that that crane was Andalucia’s crane, and Valencia’s, and maybe Catalonia’s, but not Aragon’s.

For the Spanish crisis is not a crisis of a national government over-spending and over-borrowing though the national government has now been forced to step in. It is the crisis of the regional governments, and the banks, and a lot of individuals who over-leveraged themselves trying to ride the crest of the property boom. And this boom turned out to be a bubble and this bubble burst. All those hotels and blocks of vacation condos that got thrown up along the Mediterranean coast for the Spanish and English and Swedish and lately Russian tourists, are now many of them closed, or half empty, their owners vanished, bankrupt. Many a Brit who thought to finance the mortgage of their Spanish vacation home with back-to-back rentals is in a fine mess now. Potential renters are tightening their belts and staying home.

While up here in the mountains, this all seems very far away. Of course, Aragon has for centuries been a bit cut off from things. It was into these mountain passes that the Spanish fled from the Moorish invaders in the 700’s and where the first Christian kingdoms emerged to push the Moors south and finally out of Spain completely in 1492. It is in these mountain passes that once the great sweep of Spanish history had left them, the people settled back into their local ways, taking pride in their independence, their poverty and their faith.

The tower we are staying in has been renovated by the daughter of the house across the way.  She and her husband live in Zaragoza now, but her mother still lives here. I am looking at their family’s coat of arms on an ancient stone tablet mounted above their door. The tower, we were told, is from modern times. It has been in the family since the early 1800’s and was originally built not to defend against the Moors, who never got here, but in the sixteenth century, to guard the valley from the French. It rises over the tiny little village of Oto, which boasts a population of 300 and a breathtaking view down the Broto valley cut by the river Ara.

As I sit here at 8 in the evening writing on our terrace, hundreds of swallows wheel about around the top of our tower and swoop down the narrow lanes between the rugged stone homes of the village, cows low from the farm below and the sun is still shining on the green slopes of the mountains to our east. Children call to each other from the campground below. Slowly, people are starting to think about their evening meal, as we are. It doesn’t feel like a land in crisis. It feels very peaceful and isolated, as Aragon has been for most of its history.

Those of you interested in staying at this marvelous tower can have a look at their web site: www.latorredeoto.com