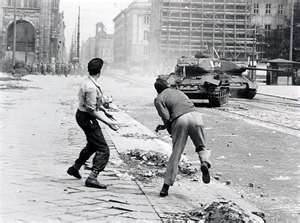 Juneteenth is an African-American holiday officially celebrated in 41 states of the United States. It commemorates the final abolition of slavery in the last former slave-owning state, Texas, in 1865. Federal troops arrived in Texas on June 18th and a formal decree was issued, some would say imposed, the next day, on June 19th. The last slaves of the Old South were thus set free.

Almost 88 years later to the day, in 1953, the East Germans tried to set themselves free as well. The 1953 Uprising, as it came to be called, was an expression of deep frustration on the part of the East German workers at the Soviet-controlled East German government’s attempt to simultaneously raise production quotas and lower wages. Riots broke out in East Berlin and quickly spread throughout the country, but after 10 days of fighting, the uprising was completely crushed, brutally, by East German and Soviet forces. Not as well known to history as the Hungarian Uprising of 1956 or the Prague Spring of 1968, this attempt, by the East Germans to achieve their own emancipation from the crushing political and economic burdens of living behind the Iron Curtain, failed, and they were to wait 36 more years before the hopes of the people fighting in the streets of the East German cities in 1953 were to be realized.

A year later, June 17th  became a national holiday in West Germany. It commemorated the failed 1953 Uprising and the people who had died in it. It also expressed the aspirations of the German nation as a whole to one day emancipate itself from the Division imposed upon it by foreign armies at the conclusion of the Second World War. It was called Tag der deutschen Einheit, the Day of German Unity, and when I lived in Germany, it was celebrated with a lot of flag waving and what the Germans call Sonntagsreden, speeches of righteous sentiment and elevated feeling, often given on full stomachs or after having had several drinks, or maybe just at a political rally. These speeches talked a lot about “our brothers over there in the East,” about their plight, about the solidarity the West Germans felt with the East Germans, but no East German for one moment thought anyone on the western side was going to come charging over to help them. And indeed, no one ever did. The East German state imploded from within. And the Russians, in the midst of the fallout from Perestroika, did nothing to support it. The wall fell on October 9th, 1989. Tag der deutschen Einheit is now celebrated on October 3rd, the day of the formal reunification in 1990.

As June 17th 2012 approaches, there are certainly Germans who remember the old June holiday or even the doomed Uprising itself, and one can’t help thinking that they might be having an ironic thought or two. For it is on June 17th that the Greeks will go to the polls in an election that could well precipitate its reneging on its deal with the European Economic Community and giving up on the Euro. And as goes Greece, mutter the merchants of gloom, so may go Spain, Portugal, Italy and who knows who else. In short, the Euro, and the dream of the currency union may be coming to an end.

The Greeks may believe that they are emancipating themselves from the draconian economic demands of Brussels, led by the Germans, and in some ways they certainly would be.  But it would also be the end of the dream of Europe such as it was imagined by the founders of the European Community, a dream of a Europe that was so fundamentally integrated in all matters economic and political that she could finally emancipate herself from the recurring and ever more horrendous wars that had periodically torn her to ribbons over the centuries. Many of the initial dreamers believed that it was also a way for Germany to prevent herself from ever again attempting to gain control of the destinies of her neighbors, that as a member of the European Community, she would have to become, once and for all, just one nation among many.

It remains to be seen what is going to happen in Greece on the 17th of June, whether the day will be heralded by the Greeks as a day of emancipation, or whether the Europeans and indeed all of us will remember it as the day the dream of a greater and better Europe began to end.

Want to know more about the 1953 East German Uprising? Go to: www.libcom.org/history/1953-the-east-german-uprising

To The Last Man

← Horror in Hyvinkää
Midsummer in Scandinavia →

To The Last Man