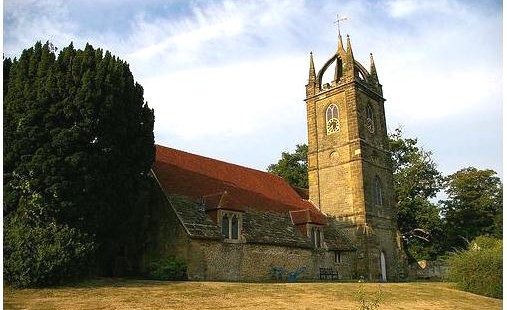 Normally, when you say you’re writing a letter from somewhere that’s where you are, but our time in England was so busy, so full of event, it was impossible to sit down and write. Thus, my comments about England have had to wait until now.

This summer’s vacation was a vacation of expeditions, of journeys, from the south of England to the north and back down to the south again, from the west to the east, from the city to the countryside, and from the house of one dear friend or relative to another. In the south, we drove through village after village of houses and pubs heavy with flowers, a profusion of color cascading down from hanging baskets and window ledges or erupting from pots and urns and well-tended gardens. The downs (which are hills) were full of cows and sheep grazing on emerald-colored grass. The shorn wheat fields were dotted with rolls. The hedgerows lined the country lanes, full of birds while the roofs of historic cottages were thatched in intricate floral patterns. And the sun shone down over it all, day after day, just like in the films, for this summer England is experiencing one of the longest stretches of warm, dry weather she has had in a long time.

It was the England of our American fantasies, the picture-postcard landscape of imaginations fueled by an over-indulgence in English period dramas on public television. It shocks you, perhaps, as much as it pleases, that England actually does look like this, one part of England anyway, the affluent south.

The other part of England, the north, is not a picture postcard landscape. It is a landscape better suited to great canvases, canvases that can do justice to its drama, its roughness, its subtle changes in light. The windswept crags of the Lake District. The gray-blue horizon of the North Sea coast stretching away before you. The Northumberland and Cumberland hills out of which the remains of Hadrian’s ancient wall poke like dragon’s teeth from the stony ground. All of these vistas beg for something more worthy of their rugged beauty than just a pleasant snap.

The weather was not as good in the north. It was cooler and it rained more. One day you saw the North Sea and one day you didn’t. The surface of Lake Windermere was calm the day you arrived and white-capped the day you left, but the fells and crags were so dramatic and so uplifting that you didn’t care. You felt as if you had been somewhere, that you had done something of significance just by seeing.

Of course, it’s true that the Northerners are heartier and more down to earth than their Southern cousins, but on the other hand it’s also more difficult to understand them. Just as you find yourself insisting for the fourth time to a new acquaintance that no you haven’t brought your pet with you, you realize they are merely addressing you with that casual Geordie expression that, once you understand it, draws you in and makes you feel as if you’re one of them.

Aside from musings on the differences in geography, temperament, and language, there was much else to occupy our thoughts while we were in the United Kingdom. First of all, the Commonwealth Games took place up in Glasgow, Scotland. The Commonwealth comprises all the countries Great Britain once ruled. Though these countries are long-independent from Mother Britain, they still like to do things together occasionally, to be chums. So, all their best athletes were up in Scotland competing against one another in sort of a mini-Olympics.

Now the Scottish venue was significant because there is a momentous vote looming on the UK horizon. In September, the Scots will vote upon whether or not they wish to dissolve the political bonds of more than three hundred years and become independent from the rest of the United Kingdom: from Northern Ireland, from Wales, but most of all from England. The vote, all seem to agree, will be close. Many Scots view the bonds of three hundred years as little more than a yoke. Others are less sure. A demagogue called Alec Salmond leads the Scottish National Party (SNP) and his hyperbole puts a lot of people off, but many Scots, though they don’t care for him, don’t see how they can vote against independence for their country. The Scots are proud and the relationship with England has always been troubled. Prior to the Union of 1707, the two countries were almost continuously at war.

Down in Northumberland, on the English side of the Scottish border, they joke about instituting passport control or getting the masons in to rebuild the old Roman wall that once guarded the approaches from the north. On the day we spent inspecting the Roman hill forts of 1,600 years ago, we watched a group of children with shields and pikes and play helmets learn a medieval battle charge. “They’re getting ready,” we said, laughing, “to man the battlements again.”

The other thing that happened in the UK while we were there was the 100-year anniversary of the declaring of war by Great Britain upon Germany on August 4, 1914, better known as the beginning of the First World War. This grim anniversary gripped the British nation (indeed all the nations of Europe) in a way that I think most Americans would find it hard to understand. World War Two was much bloodier (and more recent) and for the British cities and its Empire, far more devastating, but something about the utter innocence in which the bright young men of that generation marched off to war only to be slaughtered and maimed still haunts the collective British soul. There were commemorations, re-enactments and exhibitions all over the land.  Out of a window of the Tower of London and into the dry moat below it poured a river of red ceramic poppies, an installation that provided a sorrowful contrast to the joyful cascades of summer flowers dripping from windowsills throughout the land. In addition, in the days leading up to the anniversary and on the evening of the 4th, at 10 p.m., the lights on the great monuments in Central London: Westminster, Big Ben, London Bridge, the Eye, were all extinguished. Not only Central London went dark, but throughout the country homes and churches and businesses turned off their lights as well, until 11 p.m., the hour at which war was officially declared 100 years before.

“The lamps are going out all over Europe,” the then Foreign Secretary Sir Edward Grey said in the late summer of 1914. This summer they did again.

Perhaps the most poignant experience we had regarding this anniversary was not watching Central London go dark, or the Duke and Duchess of Cambridge wander stunned amongst a sea of blood-red flowers, but on a journey down through West Sussex on our way to the New Forest. There, we stopped in the small village of Tillington, a parish of a mere 550 souls, to look at the church of All Hallows which bears the architectural curiosity of a Scots Crown surmounting its tower. We entered this dim, quiet church which reminded my husband of the church he had pumped the organ in as a boy, and found the remains of the previous evening’s light-extinguishment ceremony as well as an exhibition about the local men who’d gone off to war in 1914. Twenty-four Tillington men never returned from service and on long poster boards, their stories had been told and old black-and-white photos reproduced, photos of them as children and young men and then finally as soldiers. Each poster panel told the story of one man, but there was one which told the story of more: the Barrington-Kennett brothers. Four volunteered, only one came home.

After we read about who had fought and died, we left the dim peacefulness of the church interior and came out into the sunshine to quietly walk hand-in-hand down the church lane and back to our car. There was a pub across the narrow roadand people were starting to arrive for lunch. Flowers were dripping from the pub’s wall baskets and a gentle breeze rustled the flowers in its garden. We thought about stopping there for lunch ourselves, but in the end got back into our car and started driving again through the sun-soaked, peaceful, rural English landscape, the landscape the Barrington-Kennetts knew as boys and young men before they marched off to war.

Too romantic, this poem, too idealistic, yet it still makes you catch your breath. You can imagine its author, Rupert Brooke, lying in a hospital bed in the Mediterranean in 1915, growing ever weaker as the blood poisoning crept through his veins. You can imagine him thinking about England, the best England he knew, the England he would not see again, England on a sunny, summer’s day.

If I should die, think only this of me:

That there’s some corner of a foreign field

That is forever England. There shall be

In that rich earth a richer dust concealed:

A dust whom England bore, shaped, made aware,

Gave, once, her flowers to love, her ways to roam,

Washed by the rivers, blest by suns of home.

And think, this heart, all evil shed away,

A pulse in the eternal mind, no less

Gives somewhere back the thoughts by England given:

Her sights and sounds: dreams happy as her day:

And laughter, learnt of friends; and gentleness,

In hearts at peace, under an English heaven.

← Fruits of the Earth
What Makes Them Do IT? →