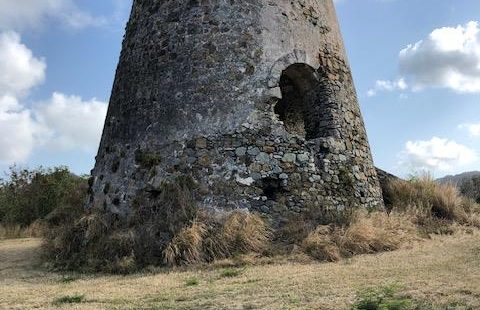 On the north shore of the Caribbean island of St. Croix, two miles before you reach Cane Bay, there lie the ruins of an eighteenth-century sugar estate. You can see this estate, or its principal landmark, the old wind mill base, from more than a mile away as you round a bend in the north shore road. The base rises one hundred feet above the road and reminded me the first time I saw it of a lonely Spanish tower atop an Andalucian hill. But it is not a tower. It is the lower half of the windmill that once powered the estate’s cane crushers. It is a vestige of St. Croix’s slave-owning past when the island was not yet American, but Danish, dotted with plantations, one of the wealthiest islands in the Caribbean.

The estate which lies in ruins below the mill, Rust op Twist, stood for one hundred years. Completed in the 1770’s by a Dutch Baron, it was destroyed during the Fireburn of October 1878. This event occurred when the former St. Croix slaves, technically free, but held by law in unrelenting peonage, rebelled and rampaged across the island. Fifty-three great houses burned over the course of several days. They burned easily. The island was tinder dry from drought.

The island was also tinder dry when we were there this April and you could easily imagine, as you walked in the evening up the beaten path to the mill base, how quickly even one torch could set the whole hillside and everything on it aflame. It was said that the estate owners hid in the base of the mill during the unrest. On a quiet Crucian evening, unrest was frankly hard to imagine. My husband and I liked to walk up and sit on the mill steps, feeling the cooler winds blowing in off the sea, watching the sunset, the hills behind us wild, dotted with the occasional house. You could hear bird calls from the bushes and bees buzzing in the wildflowers that grew in tangles over the stone and coral foundations. It was easily one of the most peaceful places we’d been in a long time.

A place to rest after work. This is what the estate’s name, Rust op Twist, means in Dutch. And there is someone resting with you as you sit embracing the wind and the softening evening light. To the right of the steps on the ocean side lies the grave of a remarkable American woman for whom the property was purchased as a wedding gift. She treasured it for fifty years and left it to her only son and grandchildren when she passed. She didn’t die in St. Croix. She had gone to America for treatment, but her family brought her back to the place she loved and buried her looking out over the estate she never wanted to sell. There is a heart-shaped piece of coral lying on top of her grave. Not specially cut, her granddaughter assured me. Someone had found the heart-shaped piece on a beach and gifted it to them to set next to their grandmother’s name.

Juanita Margaret Candice Dyer, or Candy Dyer, as she was known on St. Croix, lived a life wreathed in legend. She was a WASP during the Second World War, one of the thousand plus women who, barred from flying combat missions, flew planes from factories to military bases instead. She became a high-ranking officer in the USO after the peace and later worked as a meteorologist for the US government as well as several prestigious American universities.

You can understand why she loved the place. Most of the old buildings and walls are tumbledown and overgrown now, but still magical and definitely eerie, haunted by their heavy history of exploitation, but blessed by nature and softened by the passage of time. They are definitely also uplifted by the dreams of three of the present owners of the property, Candy Dyer’s grandchildren. It is they who continue the restoration their grandmother started and it is they who are full of plans to transform Rust op Twist into a teaching estate as well as a retreat for world weary travelers. Their dreams speak not of a wish to wring from the land every last drop of profit, but of the desire to build upon its present possibilities, for learning, for respite, for a place to plan and dream.

On the other side of the North Shore Road, down below the Dyer family house, lie the ruins of more recent ambitions. You can just see the tops of the large concrete tanks from the mill base steps. They were constructed in 1975 by a US government-funded research team. This team was mixing the cold nutrient-rich water of the ocean depths with the warm surface water of the St. Croix shore to promote marine aquaculture. A pipeline was built out into the depths to bring the deep-sea water up. On shore, in addition to the large tanks, an intricate system of hatcheries was built.

The tanks and the hatcheries and the pipeline were meant to assess the viability of using the deep-sea discharge from ocean thermal energy plants for growing saleable food, shellfish mostly. Never heard of ocean thermal energy plants? The technology has been around since the 1880’s. It uses the differential between the colder temperatures of the ocean depths and the warmer temperatures of the surface to create energy.

The scientists who worked at Rust op Twist in 1975 believed, or hoped, that a 100 MW plant was possible. Their research assumed it was. Unfortunately, their dreams have thus far gone unrealized. Forty-six years after they published their paper, Marine Pastures, there are only two small ocean thermal energy plants functioning in the world, one in Japan and another in Hawaii. Neither plant produces more than 120 kW, a fraction of what was needed for the plans of 1975 to achieve fruition.

The hatcheries are gone now, but you can still see the pipeline disappearing out under the waves and the massive growing tanks, like the German defenses overlooking the Normandy beaches, have withstood the elements of decades, the relentless Caribbean wind and spray, the countless storms. They still symbolize an optimistic belief in the future so profound that it makes you feel positively teary-eyed. It is a belief that has foundered on OTEC technology’s inefficiency relative to other methods of creating energy. It has foundered on the ubiquity of cheap oil.

You can see the tops of the tanks only if you climb high enough up the gradient of the old estate road. You can see the mill base from every angle, lording it over its surroundings. a testament to the dreams that too many brought to the Caribbean, dreams of great personal wealth wrung from the sweat and tears of an exploited race. But the abandoned tanks and the three determined grandchildren offer up other dreams: dreams of someday using the resources of the ocean to create energy that doesn’t contribute to the planet’s destruction, dreams of peace and quiet, of teaching and learning.

The dreams we brought with us were more modest, to rest and relax, to catch a break. Our dreams were fulfilled. Will the other dreams be? Ask the North Shore hills. They rise above it all, and smile.

*OTEC (ocean thermal energy conversion) technology has not completely forsaken St. Croix. OTE Corporation, a US based company that specializes in this renewable technology announced in January of this year that they had been given the green light by the US Virgin Island Public Services Commission to develop an EcoVillage on St. Croix powered by ocean thermal energy conversion. It is, however, a very high-end sort of village, offering amongst other things a spa, a resort-style pool and an organic farmers market. The location has not yet been made public, only that it will be in a “secluded valley overlooking the ocean.” It is almost certainly not what the scientists who worked at Rust Op Twist envisioned when they pursued their research: clean energy for the super-rich.

← Blue Skies
The Last of the Best →