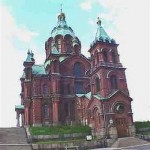 Why did Putin win the Russian elections?

He won due to election fraud.

Well, yes, there was election fraud, buses of the same voters going from polling station to polling station, for example, but Putin did not win the Russian elections because of election fraud. He won because, despite the demonstrations in Moscow and some of the other large Russian cities, quite a few people voted for him.

And why would they do that?

Because Putin has brought a prosperity to Russia that the average person had never enjoyed before he came. Or maybe Putin didn’t bring this prosperity, maybe he just had the good luck to be in power when oil prices shot into the heavens. But he is associated with it, associated with the profound improvement in economic conditions that has taken place during his time in power. And with this prosperity came stability, not a perfect stability, but a stability that after the breakup of the Soviet Union all but vanished from everyday Russian life.

Back in the 80’s, when I was at university in England and then later living in West Germany, we were all very much enthused over Gorbachev. But the Soviet Jewish refugees whom I taught English to in New York in the early 90’s would have none of it. Gorbachev was no hero to them. With his reforms had come total chaos. (The very chaos that had allowed most of them to leave.) When I got to Russia in the late 90’s, the general opinion of Gorbachev and what he had allowed to happen had gotten, if anything, worse. The Russians were by then in the grip of the most exploitative phase of robber baron capitalism as the oligarchs snapped up resources all over Russia.

While retirees starved on Soviet-era pensions that were hopelessly out-paced by the rising prices, while doctors and nurses and teachers were not paid for weeks or even months on end.

I remember one such woman. I was at my twice-weekly Russian lesson with the vice-principal of the lyceum across the road. We were just finishing up for the day when a woman I didn’t know burst into the room.

She was extremely tall and slender and had the kind of face that Anna Akhmatova had had in St. Petersburg before the Revolution, which was to say elegant and dramatic.

It was wintertime and under her conical fur hat she was wearing a woolen scarf that came down over her ears and could be wrapped around her neck to keep the wind off. It was perhaps this high, flowing headdress that made her look so queenly, like someone from one of the old noble families.

We had stopped talking when she came into the room. Her look was so wild it arrested your thoughts. You could see she had been crying, but she wasn’t anymore. It was obvious that she was beyond it.

She didn’t sit down. She just opened her mouth and her story spilled out of her. She hadn’t been paid in weeks. Neither had her husband. There was no money in the house. Soon there would be no food. She had no choice. She was going to have to go to the market and sell. “To go to the market and sell” is one word in Russian. She was the first person I had ever seen in my life in complete despair.

My Russian teacher did finally get her to sit down, drink some tea and eat a few pieces of chocolate, but she couldn’t relax, couldn’t sit still. After only a few minutes, she jumped up and left as abruptly as she’d come. To go and sell in the marketplace, presumably. And I still remember her 15 years later. I remember her beauty and her desperation.

And I wonder, did she vote for Putin?

Because as far as I know, these days in Russia, the teachers get paid.