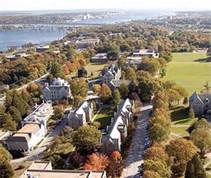 Obama has finally figured out what a lot of us could have told him a long time ago: college is killing the middle class, the cost of it, that is. A private college education with everything included costs about $60,000 a year these days. Actually, it’s a little curious to me how every private college I looked at with my mentee cost almost exactly $60,000, whether it was big or small, in a city or way out in the country, generously endowed or not. It looks like the higher education industry is ripe for some price-fixing investigations if you ask me. I want to believe in their integrity, I really do, but it’s hard sometimes not to think it’s a bit of a racket.

One thing Obama wants to do to give us a better idea of which colleges are giving value for money is to rate them. I don’t know how I feel about that. Actually, I do know how I feel about that: it’s not going to work. Ratings like that are going to be just another variation of the ratings the public schools are getting these days, ratings which are based on state testing scores, but don’t take into account, as far as I can tell, much of what really happens, and why. I could see the same thing happening with colleges and universities. I mean, it’s not the college’s fault if half their students decide to study sociology (and therefore doom themselves to waiting tables), or possibly choose not to study at all. There is some degree of student responsibility here. The colleges aren’t running babysitting services (or they’re not supposed to be).

A suggestion I’ve heard to try to cut the cost of four years of college is do what they do in the United Kingdom: make college only three years instead of four. I’m not sure that’s much comfort to the average middle class family (Oh goody, we only have to come up with $180,000 instead of $240,000!), but let’s just say, for the sake of argument, that it might be.

It’s not so simple as just chopping a year off. It’s not just that the Brits only go for three years (many of the science degrees actually do require four), it’s that their entire educational system is geared toward people going to college already knowing what they want to study there. Already in the sixth form British students have whittled down their possible subjects to three and it is these three subjects they study furiously for A-levels. The grades they get on their A-level exams then determine whether they get into the college they want. For example: if you applied to University B saying you wanted to major in French, it’s imperative that you do well on your French A-level to be accepted there. Which is to say, you are expected to be pretty good at your intended major before you even get to university.

Do we want to do this in America? Because if we cut off a year, there can be no more of this swanning around, taking a taste of this and a taste of that while deciding what you want to do. No more changing your major over and over again either. It was actually possible to change your major in the UK (you had two trimesters of preliminary studies after which you could do it), but very few people did. I was one of the few. I changed from Languages and Linguistics to Languages and History. I told my linguistics professor I didn’t want to do phrase structure diagrams of African languages I couldn’t speak for three years.

I’ll bet he thought that was a very American thing to say.

Another thing Obama might think about to make college more affordable, is making federal student aid, or the process by which a family qualifies for it, fairer. I’m talking about the infamous EFC, the Expected Family Contribution. This is the amount the government decides a family should be paying each year for their child to attend college. This is calculated on family income and assets only. It does not take into account a family’s costs or its debts. That’s your problem, baby. Consequently, what the government decides your family can afford to pay often bears absolutely no resemblance to what you might actually be able to afford to pay, if you can afford to pay anything at all. This is one of the main ways the middle class gets squeezed. Sure, most of them own their own houses and there’s income, but as quickly as money comes in it’s going out again, long before anyone might even be able to think about college tuition.

I’ve also heard about doing some of your coursework online, the so-called blended degrees, or indeed, doing all your coursework online, and my feeling about that is it’s all great, but I have to be honest. I didn’t want my mentee to go to college that way. I wanted her to have the pleasure and the privilege of the traditional college experience, the experience of being away from home, but still protected, the experience of having time to think about things that might not make you any money later in life but which satisfy your thirst for knowledge and meaning now, the experience of looking out over a beautiful university quadrangle on a fall morning and the sense of infinite possibility that that can give you.

It changes you, living four years of your life like that. I don’t know if it makes you better, but it does make you different. It gives you confidence, it makes you flexible, it opens your mind.