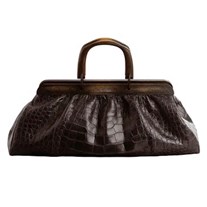 Okay, if I were the boss of that posh shop in Zurich, Switzerland, Trois Pomme, I would fire the saleswoman who not only failed to recognize one of the most famous people in the world and a member of the relatively small group of people who could afford to shop in the store, but who also failed to make a sale totaling over $41,000. (The sales tax on the crocodile bag Oprah wanted to see was $3040 alone, never mind its sticker price of $38,000.)

I mean, Oprah kindly allowed that her show doesn’t run in Switzerland, so maybe that’s why the woman didn’t recognize her, but I can tell Oprah for a fact that Switzerland is not totally disconnected from the world of conspicuous American entertainment consumption. They have newspapers, internet, television, everything. Why they’ve had them for years! What mountain village did they get this woman down from that she didn’t know an American billionaire when she saw one, especially since the reason Oprah was in Zurich in the first place was to attend Tina Turner’s wedding? Tina Turner, another American woman of color who has risen from a tough, violent and impoverished background to do very well for herself, had even invited the owner of the very shop to her wedding. So, it’s not like they didn’t know black folks carrying black cards were going to be in town. I mean, really.

Now, the sales woman claims that all she did was suggest that maybe Oprah might want to look at one of the other less expensive bags, the ones made from ostrich or suede. (What did they cost, I wonder? $25,000? $10,000?) So, basically, she was treating Oprah like a normal person, you know, like you or me, for whom $41,000 might be the Expected Family Contribution of a kid at college, a significant chunk off our mortgage or even, yes, possibly a year’s salary, maybe even two. Shouldn’t Oprah have been charmed, a little anyway, not to for once be fawned over and treated like an exalted celeb? I guess not.

Okay, I do get it. No matter how high you may rise, if you are African-American, you are sensitive about these kinds of things. It wasn’t that long ago that if you had black skin, you could not walk into certain shops, never mind buy something there. I understand the satisfaction that successful African Americans feel about being able to go where they want, do what they want and be able to afford fine things. It was a long time coming and good on them.

The thing is, these days, lots of African-Americans still can’t afford fine things. Lots of other Americans can’t either. Millions of Americans, and people all over the world, can’t afford to buy not just the finer things in life, but also the things they desperately need, like food, clothing or medicine. Yes, people are starving in India, just like your mother used to tell you. But not just there, all over, probably at a location near you.

Now, I don’t mean that Oprah doesn’t have a social conscience. She has proven time and again that she does. And no one could know better than her what it was like to grow up with very little, but maybe, just maybe, she forgot the day she gave that interview about the Swiss sales woman. I mean, I understand she was trying to say that all the barriers for black folks haven’t come down yet and she is right about that. The barriers in people’s minds are always the toughest to remove. But the other thing that hasn’t changed is that many people of all colors face insurmountable economic barriers that leave them to live their whole lives in a never-ending struggle to survive. Our world has focused a lot on racial equality but not so much on some of the other kinds.

So, if I were Oprah, and I was having a look at a $41,000 bag, I might chill out a little about trumpeting that fact to the world, even if the sales woman was a little rude to me. I might keep it to myself. I might even go for one that was only in the triple digits. It’s all a vanity after all. It’s all just filthy lucre.

Waiter, There’s a Horse in My Soup

← The Little Blue Dress
College is Killing Us →

Waiter, There’s a Horse in My Soup