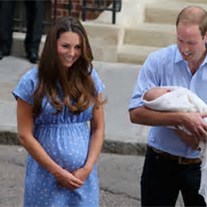 My husband and I were watching the news last night and out of the chaos of war and royal babies and healthcare reform, two things struck me.

The first was the Duchess of Cambridge choosing to come down the hospital steps in front of the world’s assembled press corps wearing a simple blue dress with a high waistline that did nothing to disguise the fact that she was going to have a lot of work ahead of her to get back to the slender fighting weight we are used to seeing her at. Her choice of dress also made it quite obvious that, well, she was going to be taking the little prince home to feed him dinner.

Good on her, as they say in the UK. She looked like a normal mum, a little tired (because let’s face it, behind all the polite euphemisms about “mother and child doing well,” is a lot of pain and screaming and blood), but satisfied and relieved that it was OVER and the kid was okay.

And after the Duke and Duchess of Cambridge drove away, my husband and I watched a piece about the US Healthcare Reform. There were two twenty-somethings arguing about whether or not Obamacare was a “good deal” for young people. Obviously, one of them thought it was and the other didn’t. The young lady was arguing that the requirement to purchase health insurance was, with all the subsidies that were available for young people who needed them, a good and very affordable deal for young people. The young man was arguing that this was not the case, that with their premiums, healthy, young people were being asked to subsidize SICK, OLD PEOPLE and they shouldn’t have to.

“But isn’t that what all health insurance does?” Ray Suarez asked him kindly, “The premiums of the well pay for what the companies have to pay out for the sick?”

“Absolutely not,” the young man replied, clearly affronted by such a notion, “insurance exists to give us the lowest possible premiums it can and our paying for sick, old people isn’t fair.”

It never occurred to the fellow that something could happen to him in his gloriously young and healthy state, that he might be abruptly diagnosed with a disease that required expensive treatment, or more likely, that he might get into some kind of accident that landed him in a hospital operating room. After all, you never know these days. You might be standing in the wrong place at a marathon.

Ray Suarez gave up after that and the young lady was probably inwardly gloating that her debate partner had made a fool out of himself, but neither she nor he had addressed the larger issue, I believe, which is that in a civilized society, one group is always paying for another at some point, but that the groups shift. If you’re paying for someone now, you can be sure they’ll be paying for you later.

It reminded me of an argument I used to have with my father when he was in his last years. He objected to paying high property taxes to support the local schools that his children, long grown, were not attending. He thought it was a bad deal for older people to have to pay for OTHER PEOPLE’S CHILDREN.

“You pay to live in a civilized community,” I would say to him, “where the children are well-educated and well-socialized and might help you across the street if you needed it. “

He wasn’t convinced. He drove everywhere.

“Well, look at it another way.” I said, “When my sister and I were enjoying the benefits of a public school education for a total of seventeen years, there were many pensioners both down in Wantagh and up here in Newtown who did not have any children in the public school system at that time, but they paid their property taxes to those two towns so that my sister and I could get a decent education. Now it’s your turn. ”

I don’t think I convinced him and it seems to me that that conversation and the news piece I heard last night are symptoms of the same problem. Groups within the society we live in feel less and less of a connection to one another. They don’t see why they should do something “against their immediate interests,” to support another group of the population. They don’t see how we are all joined together.

It’s a dangerous and depressing state of affairs and I hope that the Obama people who are spreading out across the country to tout enrollment in the new health plans have the same courage the Duchess of Cambridge showed in her little blue dress yesterday evening. Don’t sugarcoat it. Tell it like it is. It’s okay. Yes, younger people are being asked to pay. Others have paid for you, and will again. We have to support each other at the different stages of our lives.

I pay property taxes so other people’s children can learn and I pay my health insurance premiums so OLD, SICK PEOPLE can get care if they need it. And when I’m old and sick, I hope that the child or grandchild of one of the children that were educated on my dollar looks after me.

The End of the World
Tags: England, health care