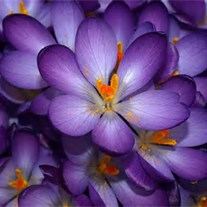 Mother’s Day is now a trip to the cemetery for me, I’m afraid. A trip to the florist’s first, of course, to buy flowers, but then a drive past the local Congregational Church, a bumpy parking job in the root-tortured lot of one of the local town parks and then a walk across a quiet country road, bouquets in hand to decorate my mother’s (which is also my father’s) grave.

The flowers are always purple or lavender since this was my mother’s favorite color. It was the color of her wedding dress, the dress she was buried in and I am conscious, as I cut and arrange the flowers, that she lies below me wearing it, next to a box that contains my father’s ashes. In death, they have again achieved the union that they enjoyed for nearly six decades until in the final years of their lives they were parted first by my mother’s Alzheimer’s and then by my father’s passing. They were only reunited a year and a half ago in this quiet place under a cedar tree in a small Connecticut cemetery.

And as I kneel there, arranging flowers and re-reading, for the umpteenth time, the beginning and ending years of my mother’s life, I am generally overcome by tears for a few moments until I remind myself that my mother’s death was a release, that the quality of the last years of her life was deplorable.

But as many of you who have lost people will know, it is not generally the end that makes you cry. It is remembering what went before it, all the years full of people and places, all the memories of time spent together, or not, all the things they said or did that didn’t seem remarkable to you at the time, but in the light of death, take on a deeper meaning.

My mother was eighty-eight when she finally passed. A lot to remember. And of course I don’t remember a lot of it, since I wasn’t there to do so. My mother was forty when she had me, so there are forty years that I had to hear about second hand, sometimes third and fourth hand. There are a lot of gaps. There are some questions that I only really thought to ask her in the last years of her life when the ravages of Alzheimer’s had already made it impossible to get answers. There were things I only learned upon reading letters she had written before coming East from the city of Pittsburgh where she was born. These letters came into my possession after my father died and I cleaned out the condo my parents had been living in.

I read, for instance, in a letter my mother wrote to a friend in the 1940’s that she was worried that marrying my father and having to come East for good to live with him in New York wasn’t the right decision for her. She knew she was already 26 and should be getting married (in 1948 women like my mother knew this), but my father was a very different person from her and she knew she would have to leave the world she had grown up in, a world in which she went to church regularly and was surrounded by her extended family, to go and live with what must have seemed to her at the time a very daring man from New York.

She lived a great deal in her head, guarding thoughts that she knew we would laugh at, from the light of day. She never talked about her upbringing, or very rarely, certainly I have no memories of her ever talking about it. She suffered a great deal, I think, from the fact we were not as much of a church-going family as she would have liked us to be. Though my father’s family were Lutherans, my father was a very nominal kind of Lutheran. He had been dragged to his confirmation by his ear, I think, and didn’t much go to church after that. My mother, who had been brought up a Swedish Lutheran, and later became a Baptist, certainly longed for church and the support, both spiritual and social, that it would have given her, but after a few attempts with the Unitarians, this was not to be.

It is now my belief that my mother, who became a fervent believer in health food, which I think she came to see as another way of “right-living”,  substituted this secular dedication for the religious dedication that living with my father made it difficult to practice. We were brought up on health food long before it became fashionable, when people who believed in that sort of stuff were thought to be eccentric kooks, but my mother had the courage of her convictions. I suffered greatly from these convictions. As all children do, all I wanted to do was belong. I’ll never forget the day my mother sent me to school with pineapple juice instead of the Cool-Aid or Tropical Punch I should have had to share with the other fifth graders at our party. Though I tried to explain how humiliating this would be for me, she refused to budge. Nor will I ever forget those lunches I carried to school, lunches of hard, dark home-made bread with tuna fish that barely had any mayo in it, a bag of carrot sticks and an apple. How I longed to buy hot lunch with the other kids, to stuff my face with pizza or spaghetti and have ice cream or chocolate cake.

Food was not her only eccentricity.

I remember when I was still in the second grade, down on Long Island, that my mother would not let me wear knee socks to school. She thought them immodest and always sent me to school in tights. Tights were hopelessly uncool. How I longed for knee socks! Everybody else wore them, I mean everybody. When a few years later I read Anne of Green Gables for the first time, I totally felt Anne’s pain at not having puffed sleeves the way all the other little Avonlea schoolgirls did.

I was not pleasant to my mother about these things. I resented being made a laughing-stock. I most definitely didn’t understand.

Now, all these years later, when I remember my mother, I remember a quiet, often absent-minded and naive woman who was two decades older than I was and who it was sometimes difficult to connect with. But I also remember a woman who left her books and afternoon radio programs and walks to go back to work so my sister and I could go to college. I remember a woman who didn’t like to drive but who drove me up an icy mountain every winter to get me to my cello lessons. I remember a woman who never questioned the fact that she should sacrifice herself for her children, so they could have a better chance than she had had.

Despite the fact she had Alzheimer’s, she knew me to the end, which surprised me. I was expecting to end up in her mind as one of the many Swedish cousins she had left behind her in Pittsburgh, but that didn’t happen. She still knew I was her daughter although she wasn’t completely sure if I was the older or the younger one.

Now I guess she knows who I am.

I’m the younger one, the one who went farthest away and then came back home to stay, the one who learned to speak the Swedish she had forgotten or never known, the one who went to live in Sweden, the country she had always dreamed about, the one who wore her purple wedding dress to be married, the one who is known at school for her collection of brightly colored tights, and who always eats an apple with her very healthy lunch, the one who is quiet as she was and lives a lot of her life in her head.

The one who comes with the flowers.

My Cousin in Pittsburgh

← What’s in a Name?
Stockholm’s Burning →

My Cousin in Pittsburgh