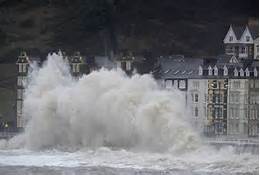 Even I, no nay-sayer of global-warming, have caught myself thinking it. When climatologists repeat their dire prediction that the world’s temperature will rise 2° degrees by mid-century, I ask myself, “Is that really so bad? I mean, I know it’s not good, but is it something we really can’t live with?” Of course, what I’m imagining when I think this is that it will be 32° on a particular day in January instead of 30°, or 97° degrees during the dog days of August when in the past it would only have been 95°.

What I do not imagine, or perhaps I should now speak in the past tense, is what we have watched happen this January and February. That a small differential in the global temperature can shift those mighty rivers of ever-flowing air, the Polar Vortex and the Gulf Stream, and shift them so tremendously that already some of our most basic and fundamental assumptions about seasons and temperatures have been called into question. Life as we know it, as we have constructed our houses to live it and our finances to provide for it, as we have planned our holidays to enjoy it, and our tables to receive its bounties, will not be the same. Already now. We do not have to wait for mid-century.

I am thinking not only of the days of sub-zero temperatures in the United States that reached down into southern states where houses are not built to withstand them and crops are planted on the assumption that no such temperatures will ever occur. Nor am I thinking only of the mountains of snow that poured down on some of these same southern localities that do not budget for the materials to control it or for that matter expect their inhabitants to know how to drive in it. I do not think only of the strangely warm winters in Alaska or Scandinavia or the drought in California that has now reached its third year and will truly begin to have an effect on the abundance of fresh fruit and vegetables we so take for granted here in the United States.

No, I think of Great Britain, where, because of an apparent shift in the Gulf Stream, it has been raining for six weeks straight and whose southern and western coasts have been battered by storm after violent storm. Much of southern and western Britain lies at this moment under flood alert. The banks of the Thames, the Severn, the Avon and too many other rivers to count burst their banks long ago and the villages near them are all under water. Patience, that most English of virtues, is running out. The other day the two Princes royal, William and Harry, out in a local village sandbagging with the Army, were asked by reporters if they were having a good time. Harry replied tersely that he was not because the reporters were dogging them. His brother, William, suggested the reporter who’d posed the question put down his notepad and start to throw a sandbag or two himself. It doesn’t bode well when William and Harry, trained since early youth to respond with only the mildest of pleasantries, cannot keep their royal frustration in check.

And no wonder. On the southern coast of England, cliffs are collapsing onto the Dorset beaches and in Brighton boardwalks have disappeared under a layer of pebbles washed in with the surf. In Wales, waves four stories high have been crashing into buildings built perilously close to the seawalls. There is talk now of fifty municipalities on the coast of Wales beginning “a managed retreat from the sea” because their positions have been judged too precarious and potentially too expensive to defend under the ever more fierce encroachments of the North Atlantic. (See my post about the lost city of Dunwich in East Anglia.)

Back here in the USA, schools have closed so often this winter that both teachers and students struggle to maintain continuity and end-of-year schedules are creeping ever closer to July. Towns and cities have exceeded their budgets for plowing and salt and are having to go into other funds to find the money to continue with the winter snow cleanup.

Are we inching toward a world where the single biggest item in local budgets will not be education but weather-related cleanup costs? Are we going to have a new class system in this country: those with generators that can run their houses when the power goes out, those with generators who can run a few essential systems, and those with no generators at all? Will the school years be lengthened, not for the purpose of increasing instructional time, but just so we can get in the number of days we are already supposed to have?

When I used to read about the environmental demise of ancient civilizations, I remember smiling to myself like an adult listening to a child tell them some preposterous tale. It seemed scarcely credible to me that a few bad harvests or a series of deadly earthquakes or storms could exhaust the lifeblood of a city or a metropolis or a nation and cause it to wither away and die. I find, however, in the light of recent events, this historical incredulity to be no longer supportable, for exhaustion is the operative word here.

One grows tired, both as an individual and as a people. One grows tired physically, mentally and economically. Storm after storm, flood after flood, disaster after disaster. It wearies the populace and drains both the public and private purse.

Do we really want to live this way, lurching from one mammoth storm to the next, waiting for tornadoes to rip through our towns or hurricanes to engulf them, watching our rivers shrink away to insignificant rivulets or swell to small inland seas? Do we really want to measure out our lives in environmental catastrophes? For it seems to me that this is the way we are going. It seems to me that we are going this way in full knowledge of our doom.

We’ve heard of it before, an oft-told tale, of the emperor Nero who fiddled while the city below him burned.