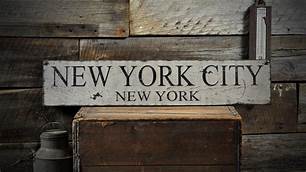 Fathers, Sheisters, and Other New Yorkers Who Shall Not Remain Blameless

A look at the calendar tells me that Father’s Day is here again. Father’s Day these days, other than being an occasion to buy a feline-themed card from our cat to my husband doesn’t require a whole lot from me, only remembering. My father passed away in 2009. His death certificate read sepsis and C-Dif, but he really died from the exhaustion of looking after my mother as she descended into the bewilderment of Alzheimer’s. I miss him of course and wish he hadn’t gone the way he did, but I’m actually kind of glad he’s passed, that he’s missing the foolishness we’re living through.

The first time I was glad my father was dead was the day of the shooting in Sandy Hook. Our family were long time Newtown residents and it would have broken his heart to see Newtown emerge from its sleepy anonymity for the reason it did. Now I’m grateful he’s missing the political carnage I see all around me, the ecological carnage, the cultural degradation. I’m grateful he doesn’t have to listen to the evening news or Sunday talk shows and hear the things people think they can say now, things it used to be you didn’t dare utter unless it was 3 a.m. in a bar.

My dad was a New York guy, a little rough around the edges, and though four decades in Connecticut smoothed those edges out a bit, in the end, at the age of 88, he was still pretty much the brash, straight-talking boy from Hollis, Queens he started out as.

He grew up in Hollis in the 20’s and 30’s, he and his sister the grandchildren of Norwegian and German-speaking Jewish immigrants. He went to local schools, skipped kindergarten because he was a smarty pants, and later attended Brooklyn Tech and a few years of Pratt before he dropped out to work. He never finished college.

My father was twenty when the United States entered World War Two and even though he had legitimate deferments, the company he worked for had military contracts, my father refused the third one and enlisted anyway. He told me years later that he did this because he knew the war was going to end eventually and that during peacetime he wouldn’t be deferred and would have to serve seven years instead of two. When I pointed out that the peacetime stint might have been longer, but wouldn’t have been as dangerous, he looked at me with the incomprehension of the twenty-two-year-old who’d figured out his options in 1943. It never occurred to him he might die then and I guess it still didn’t. He didn’t, of course, die, nor was he badly wounded. He served in the artillery in New Guinea, retook Manila under General Macarthur, and was scheduled for the invasion of Japan. Had that happened, he might really have perished in the war and I wouldn’t be sitting here writing this. He wasn’t overly sentimental about his service, but he thought it was the right thing to do, the thing everyone else was doing and so he should, too. In his later years, he believed in bringing back the draft. He thought that system was fairer.

When he came home in 1946, he went back to work, back to courting my mother, and back to being the brash New York guy he’d always been. He danced swing in the clubs and rode horses in the city parks. His favorite drink was a Manhattan. When he and my mother finally married in 1949, they lived on 57th Street for a while and then moved out to the Island where they were able to buy a ranch on the GI Bill. My sister and I were born out there and lived the first years of our lives in Nassau County a few miles away from Jones Beach.

A year after I was born my father worked on the US Tire and Rubber Ferris Wheel at the 1964 World’s Fair in Flushing Meadows. My father, as he got older, REALLY liked to talk about that. He talked about it A LOT. He worked for US Tire and Rubber for more than twenty-five years, standing on the Long Island Railroad doing the Times crossword on his way into Penn Station every morning. In 1971, he moved his family up to Connecticut when US Tire and Rubber became Uniroyal and relocated to Middlebury. He designed the machines that made tires. Enormous machines, really complicated stuff. He liked to talk about them a lot, too.

Politically, my father evolved. He started out as a Rockefeller Republican, culturally liberal, financially conservative. Most of this conservatism came from having grown up as a Depression-era kid. When he was little his family lived from meal to meal and after that he was always really careful with his money. As he grew older, however, and retired, and then in later years started to feel physically frailer and economically more vulnerable, he tended toward the Democrats. The last President he voted for was Obama and he made sure my mother voted for him, too. Is it voter fraud when an 87-year-old man writes the name of the candidate on his wife’s hand? I know exactly what he’d think of the guy we’ve got in The White House now.

Like any good New Yorker, my father knew a sheister when he saw one. He knew when he was being taken for a ride. He’d have nothing but contempt, not necessarily for the voters who mistakenly flagged the car down, but for the guys who hopped in after they saw it was moving right along. He would despise Rudi Guiliani going on the morning talk shows and gleefully telling people the President could shoot someone and then pardon himself. This from another New York guy, a lawyer who initially wanted to be a priest, a public servant who prosecuted mobsters. My father would despair of a President who insults the Prime Minister of Canada, that most civilized of countries, and then goes off to Singapore to call a murderer a friend.

He’d wonder about all the things he fought for, worked for, and believed in. He’d wonder where they’d gone. I’m hoping he’s not sitting on a cloud somewhere, looking down at what’s going on. I’m hoping he’s asleep. I wouldn’t wish what’s happening on my best friend, and certainly not on my Dad. I’m grateful he isn’t here any more. I’m grateful he left us when he did.

They Flew Through The Air
Tags: calamity, holidays, parents, veterans

They Flew Through The Air