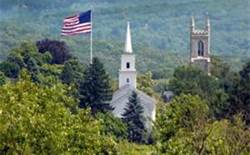 There have been days since my father and mother passed away three-and-a-half years and a year ago respectively when the rage that still smolders at the way they were both forced to die is completely blotted out by a feeling of relief that neither of them had to know about something, either in the family or in the world, something that would have hurt them terribly had they had to bear it. Yesterday was one of those days.

When we lived on Long island, my father commuted for many years into Manhattan where he worked as a mechanical engineer for Uniroyal Tire Company. Uniroyal, however, in the late nineteen-sixties started sending my father up into Connecticut, to a small plant that they owned there in a little rural town in the southwest part of the state. The plant made fire hose from fabric and it was my father’s job to troubleshoot some of the problems they were having with their machinery. He had to return several times before things were running smoothly, but did so each time with pleasure because he had become totally charmed by the location of the old red brick plant, set on a small, rushing river, in a wrinkle of a glen between hills thick with pines. Just down the road from the factory, was a tiny old village center, built over this same river, where he went to get sandwiches for lunch. For a man who had been born and brought up in Queens, it must have seemed like paradise.

So, when a few years later Uniroyal decided to move their headquarters from Rockefeller Center up to a small town called Middlebury, Connecticut, my father, instead of looking for property for his family in and around Middlebury as everyone else was doing, went back to the place that had so taken his fancy just a few years before. The old red brick plant was located in a village called Sandy Hook, in the larger town of Newtown. Our family moved there in 1971.

If you think Newtown is bucolic today, you should have seen it in 1971! I grew up spending weekends and summers playing with a posse of neighborhood children in my or someone else’s backyard (when our mothers wanted us for a meal or a bath or to go somewhere, they just opened the back door and yelled), riding bikes without helmets on country roads and walking almost a mile to a bus stop where we children stood without parental supervision and waited for the school bus every morning. Nobody thought twice about any of these things.

The biggest tragedy I can remember from when I was around ten or eleven was the day my mother called up our neighbor and asked if her son could carry my cello for me to the bus stop the next morning. I was mortified. The neighbor’s son showed up the next day looking like he was reporting for some extreme form of physical and mental torture. Neither of us could look each other in the eye. He took the cello from my mother, unhappily, but reasonably carefully. As soon as he was out of sight of our two houses, however, he broke into a wild gallop, cello bouncing on his back, and sprinted the entire way to the bus stop. I had to follow him at a run, humiliated and sweating. The next time I had a cello lesson at school, I somehow convinced my mother that I could manage to carry the cello on my own. The whole event seemed pretty traumatic and scarring to me at the time.

When I was older, in high school, I’m afraid I found Newtown pretty boring. I was not into sports and consequently spent a lot of time in my room reading books about people doing interesting things in other places. I was also into punk rock (or thought I was) and went out of my way to wear curious outfits to school. There was a pink neon jumpsuit I picked up during an exchange summer in Stockholm that was particularly memorable. I wonder if I ever lost it and did something crazy, how people might describe the way I was in high school. Would they have called me “intelligent and remote?”

Until yesterday, I think I probably wasn’t the only person who still would have described Newtown as a town where not too much was happening. Why only last weekend, at a party there, when one of the guests suddenly passed out and we called 911, two ambulances and two police cars showed up almost immediately and we all joked with each other how there couldn’t be much happening in Newtown if one man falling over could get that kind of emergency response.

The red brick factory is still there at the river on Glen Road and I often drive through there on my way to and from Southbury, where I live now, in the next town over. It’s a nicer drive than going on the highway and I like to pass the old plant and remember when it was still a factory and my father took me there to show me the complicated machines he had worked on. My third grade class took a field trip there as well, organized by my father, to see the machines run.

One turn off Glen Road is the road Sandy Hook Elementary School is on.

It is not the elementary school I attended though it might have been. My parents initially looked at property on that side of town, near to the place my father had liked so much, but they couldn’t find anything they wanted there, so we ended up on the other side, in Dodgingtown. I took a bus ten miles out to an elementary school called Middle Gate in the far corner of Newtown. In those days, Newtown had only three elementary schools, now it has four.

My parents lived in the house in Dodgingtown for more than thirty years before they moved to a retirement community in Southbury. They loved Newtown. They only left because they really couldn’t manage there anymore.  What happened yesterday would have devastated my parents had they known of it. It would have signaled for them, in the same way September 11th did for many of us, the end of the world they thought they knew and the beginning of something they increasingly did not have the strength for anymore.

I’m not sure I have the strength for it either.

Don’t get me wrong, I’m in favor of strict gun controls, (like NO guns), and as much mental health counseling as we can muster, but I not only do not believe that there are going to be stricter gun laws in the America I live in (each time this happens, we wring our hands and then do nothing), I also think it’s often very difficult to know whom to counsel and when to do it. I don’t see large amounts of money being granted for this either in an era of cutting back on everything. I also don’t see the media keeping these things dark to deter future killers from seeking notoriety.

I didn’t go to any prayer vigils. I’ll mourn, like I do a lot of things, by myself. On Monday, however, I will go back to school, to the elementary school where I teach and have taught for the past 15 years. I already have an updated lock down plan sent by our principal on my computer and I have no doubt that I will be sitting on the floor in a corner of my room out of sight of the door tomorrow or the next day, trying to keep kids quiet, practicing what to do if something happens at our school. And reflecting, that when I became a teacher in the public school system, I didn’t think part of the job description would be to take a bullet for a child. I imagined all I would be doing was teaching them to speak English properly.

← Coming to America
Island Of the Clouds →