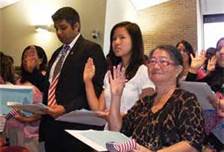 A shocked silence spread over the crowd sitting hip to hip on the long, polished wooden seats.

What did she just say? Sixty-two people clutching invitations and green cards to be surrendered, sixty-two people dressed in their best for the coming ceremony were suddenly, simultaneously gripped by one horrible, devastating thought. Was there something I forgot to do? Is it all not going to happen after I struggled and studied and paid and waited?

Finally, one lone hand did go up. A boy who could not have been more than four, the son of a strikingly beautiful Indonesian woman who hoped to be naturalized that day, raised his tiny sweatered arm.  There was a general nervous titter. His mother, with a tense smile, held her paperwork over one eye in embarrassment.

“You learned it?” the lady officer asked him, grinning. He nodded solemnly. He clearly had no idea what she was talking about.

“Actually, you didn’t have to learn it,” the immigration officer soothed the assembled company, “that’s completely unreasonable. No one memorizes the Constitution.”

The expulsion of held breath from sixty-two mouths was audible.

“But you do know how many amendments there are, right?”

“Twenty-seven!” they all shouted in unison and relief. That was a test question they had actually learned.

Did you know that, dear reader? Did you know that there are twenty-seven amendments to the Constitution of the United States? Did you know the first ten of them are called the Bill of Rights? Good for you, if you did, but most people don’t bother about these things. They leave it to the immigrants who want to become citizens. These are the people who could give us all a lesson on our Constitution. And on a lot of other things, too, I’ll wager.

I am, of course, already a US citizen, but I was there on Friday to watch a former student of mine become one. She emigrated from the Cape Verde Islands when she was eight years old and at the age of eighteen, in her last year of high school, applied for her citizenship. She had to pay her $850 dollars. Yes, folks, applying to become a citizen of the United States of America is a gold-plate affair. She studied about the Constitution, about American History. She knew who the President was. And she passed the interview. Last Friday, she was finally going to swear her oath and get her naturalization papers.

We all waited nervously for the judge, who finally arrived, a man of gargantuan appetites to judge by his size. He had some trouble ascending to his chair and once there sat for a few moments breathing hard and looking decidedly winded. I have no doubt that there were some inveterate worriers in the audience who thought, “Oh great, now the judge is going to keel over!”

I don’t wish to be a niggler, but I had a few issues with the oath. The officer of the court who read it struggled with some of the more arcane vocabulary and thus sixty-two people swore to “renounce and abjure any allegiance or fealty to foreign princes and potenstates,” but never mind. After the oath was over, and sixty-two people had shouted “I do,” the judge gave his speech about becoming a citizen. Frankly, he looked a bit bored when he started, but warmed to his subject. “You are first class citizens just like everyone else in this country,” he told them in a fatherly tone, “you have all the same rights and responsibilities. Don’t let anyone tell you you don’t.”

And then came the part the judge clearly liked most of all. He announced that he would be descending to the courtroom floor to hand out the certificates and that any ladies who wanted to pose with him for pictures, or give him a hug if they felt so inclined, were welcome to do so. What happened in his courtroom stayed in his courtroom.

And he did descend, and the officers of the court assembled themselves around him, bearing certificates and flags. The name of each new citizen was read this person then issued forth from the huddled mass of people to get the piece of paper that would mean, though they may have been here decades already, that they had finally arrived.

The judge wasn’t kidding. He hugged women. He posed with them and the infants they carried in their arms. He posed with brothers and sisters and husbands and wives who had been naturalized on the same day. Posses of relatives clutching cameras and pink rhinestone-encrusted I-phones followed each new American forward. The judge had them hand their photographic gear over to the officers of the court so the whole family could get into the picture with him.

“Could you see this happening in England?” I whispered to my still unnaturalized husband.

“No way,” was his emphatic reply.

I have to admit that there was a circus-like atmosphere to the whole thing that was peculiarly American, but the fact is, it was also very nice indeed. Every person was congratulated, made welcome, embraced, literally.

Possibly because of this, very few people left the ceremony early, though they could have. Once they had their certificates there was no legal reason to stay. Most people remained to the end, however. They applauded each new American, applauded for people they didn’t know, but whose struggles and difficulties they could well imagine for they had shared them. Everyone took obvious pleasure in their mutual achievement. They formed, for the hour-and-a-half that they were together in that courtroom, a community, a community of people who had come from thirty-three different countries to end up here, holding the same piece of paper, hoping for some greater measure of success in the country they had just sworn fealty to, hoping for their dreams to be made into reality.