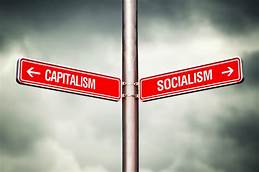 That’s right, you heard me, SOCIALISM. It seems that these days some people actually stand up and announce that they are for it. Wow. Back when I was growing up if you did that, you were told to go live in Russia if that’s how you felt about it.

We’ve obviously evolved. Or at least the Democratic Party has evolved, or some of the candidates seeking the Democratic presidential nomination. Maybe the university left-wing intellectuals really have taken over the Democratic Party, something that conservatives have been railing about for years. Though I’m not so sure. You could hear the collective sigh of relief from the Democratic base when Joe Biden finally got into the race.

Though it might be instructive to remember what socialism actually was, and what it wasn’t. Socialism started back in the 1820’s and 1830’s with groups of like-minded people who wanted to live and work together as equals. They pooled their resources and formed small communities in out of the way places. Most of these communities didn’t last.

Karl Marx and Friedrich Engels, the German revolutionary socialists, wrote The Communist Manifesto in 1848. Their book described the contradictions of capitalism and predicted socialism and then communism would be the future. Whether Marx and Engels were right or wrong seems less important now than the political movements their work produced. Socialist parties sprang up all over world committed to improving the conditions of the workers, to addressing income inequality in the age of rapid industrialization.

It was the social and economic chaos of the First World War that brought the socialist breakthrough. Where there had been political parties, now there were revolutions. In Russia, this revolution won the day. It was also in Russia where the original socialist ideal of a political center making informed decisions for the common good was highjacked by a Bolshevik party that wanted power. The Bolshevik victory set an unfortunate pattern for other countries who turned to “socialism:” dictatorship, corruption, brutality.

This isn’t the kind of socialism Bernie Sanders is talking about. Bernie is talking about the “Socialism” that exists in the Scandinavian countries, where the economic systems are competitive and capitalist, the democratic institutions solid, but where the people also enjoy an array of social programs and supports that are frankly pretty amazing.

I witnessed this kind of Socialism in Sweden and Finland in the 1980’s and I’m with Bernie, it’s pretty darn impressive. No one I knew worried about medical insurance. They all had it. No one had to save in case they got sick. Families didn’t have to start college funds as soon as their kids were born. Students received automatic loans from the government to cover their costs.

There were many other perks to the system, but the crowning glory, to my mind, was the guaranteed, paid one-month summer vacation.

Imagine if American families, if your family, didn’t have to worry about medical costs or paying for college. Imagine a month off in the summer. Imagine the peace of mind.

There was of course a catch. Scandinavian taxes and prices were very high. Buying a house was out of the question for a lot of people. Eating out was often prohibitively expensive. Some people argued that it evened out, that the money they didn’t have to spend for medical expenses and education, could go to paying taxes and higher prices. But my experience was it didn’t even out completely. Though they took their social programs for granted, the Swedes and Finns I knew also wanted things to be cheaper. They wanted there to be fewer restrictions. They wanted to own their own homes.

Can America learn from Scandinavia? Absolutely. Can we be like them? I’m not so sure. The largest Scandinavian country, Sweden, has only 10 million people. All the Scandinavian countries are small, wealthy, highly-educated and, by American standards, ethnically and culturally homogeneous. We need to ask ourselves. Is what works in a country like Denmark, with only 5.8 million people, possible in a country that has 327 million?

But don’t get me wrong. I’m no foe of central planning. I think America needs more not less.

At a dinner party at our house the other night, we had a discussion about the difference between the United States and China. “It’s true what Trump says,” one of our guests remarked. “All the big Chinese companies are closely tied to the government. But that’s because the Chinese government thinks long-term and makes strategic decisions about how they want their economy to grow. Then they work with, or make sure, companies do what is necessary for this to happen.” Our guest thought that instead of the US complaining about it, we should take a lesson. “We need a bit more long-term thinking and central planning here in the United States,” he said. “Government needs to work together with business to develop the economy for the future.”

Government and business working together isn’t exactly a revolutionary idea. Our politicians often speak about public-private partnerships, but are they speaking about them enough, and exactly who is doing the talking? The Republicans, the traditionally pro-business party, are ferociously anti-government. The Democrats, the self-professed party of government, say they want to work with business, but I’m not sure business wants to work with them.

I do think if the Democrats are serious about winning back the White House, they need to stop using the word socialism in a country where, rightly or wrongly, it is most often associated with prison camps, cement walls, and a lack of political freedom. I think maybe they should talk, as many of them do, about the original ideals of socialism, that society should be fairer to people who work. The original socialists were reacting to the sins of a system that treated workers as expendable. President Trump’s base is reacting to that, too.

Can socialism save the working class? Can it save any of us? I don’t know. Not if it can save us or if Americans will accept the rescue attempt. I do know that “the biggest and best ship in the world” is sailing straight for that iceberg while the band plays and the people dance. Let’s just remember that it wasn’t only the working class, locked below decks, who went into the water that night. Plenty of people who thought they were doing all right for themselves went in as well, for the vessel they were all on was the same one and Mother Nature wasn’t making any distinctions.