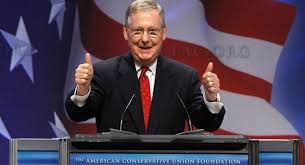 One of the questions my students always ask when we talk about slavery is why the slaves didn’t fight back.

First of all, I tell them, many slaves did fight back, most, if not all, unsuccessfully, but I also do say to children who are still too young to fully understand, “You’d be amazed the treatment most people will put up with when the result of not putting up with that treatment means your immediate and total destruction.”

Usually, in February, we have local African-American adults come and talk or read to the kids about, amongst other things, slavery, but I thought this year we might invite one of the Republican Senators to pop by since I can think of no better person to explain to the children the degradation people are willing to suffer to ensure their survival.

Now I do not wish to equate the millions of formerly enslaved African-Americans to the 51 Republican Senators, many of them trained lawyers, who voted for a trial without witnesses. I do not wish to equate a group of people who survived being stolen from their homes, subjected to the most hideous tortures, stripped of their rights and denied even the smallest modicum of their humanity to the sons and daughters, mostly sons, of some of the most privileged families in our land. The average net worth of a US Senator today is, conservatively estimated, $3.2 million. Our Senators have attended some of the finest universities in the country. Many of them attended very fine prep schools before that. They have run businesses, traveled, lived in fine homes, enjoyed every advantage, every privilege. You would think that that kind of money and privilege might buy a little courage, but apparently it is the other way around.

What we saw in the Senate these last two weeks, dressed up in not-very-fine words and some very curious legal arguments, was not objective deliberation. It was fear and trembling. A vote for witnesses in the impeachment trial was, for 51 Republican Senators, a vote against Trump and a vote against Trump would unleash upon the hapless voter a violent tweet storm, a social media man hunt, and a political crucifixion.

We are the squad, and the grenade has just exploded.

Trump now understands that he can cross any line, offend against any norm, flout any law, and no one in his party will do anything to stop him. They fear him. Through his control of their voter base, he holds their immediate and total destruction in his hands.

What would Trump have been like as a slave owner? Would he have been benevolent and fair, or cruel and capricious? Ask any of the 51 Republican Senators. They know. They can hear the whip cracking in their dreams.

← Bon Voyage
Corona in Connecticut, and Italy, and the UK, and California… →