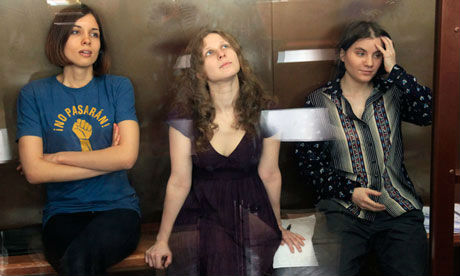 The trial was over. The appeal had failed. The world’s press had gone home when last weekend, Maria Alyokina, age 24, and Nadezhda Tolokonnikova, age 22, the two convicted members of the Russian female punk group Pussy Riot were quietly transferred to separate prison camps in Perm and Mordovia, Russia.

It wasn’t a riot any more.

And these two women, convicted of “hooliganism motivated by religious hatred” for one rather poor song sung on the altar of a church, have now joined the ranks, whether they meant to or not, of a long list of political reformers, artists and intellectuals who over the last 200 or more years also ran afoul of the Russian or Soviet authorities. They follow in the tragic footsteps of Mandelstam and Solzshenitsyn, of Dostoyevsky and Shalamov.

Would any of these men have recognized the Pussy Riot performers as artistic, intellectual or even moral compatriots? Possibly not. Do Alyokina and Tolokonnikova see themselves as such? We don’t know.

But it is a sad thing indeed that one of the main threads to run unbroken through modern Russian history, from the days of the tsars to the Soviet Union and now into the “New” Russia of the post-Soviet world is the network of labor camps that lays like a cancer upon the lands of the Russian Republic. Of course, the conditions in these camps are no longer as brutal as they were in Tsarist times, or later during the darkest days of the Stalinist purges, but they aren’t very nice either. The camps remain what they were always meant to be: a punishment for the condemned and a warning for those left behind.

I don’t know why, but when I read the news of the transfer, I thought of the poet Akhmatova. What Anna Akhmatova would have thought of the girls in balaclavas I can only imagine. Akhmatova,  the cool, aristocratic poet of Petersburg’s Silver Age, who did not the flee the Soviet Union as so many of her fellow intellectuals and artists did, was and remains an iconic figure of both endurance and restraint under the most difficult of political and moral circumstances. Yet, she was to publish the most haunting poem of the Soviet penal experience. It was called Requiem, written between 1935 and 1940, and it described the hell not of the taken, but of those who had not been.

In the dedication to this poem she describes the grief of the women standing in cold lines outside the Leningrad city prison, women, like herself, waiting in vain to hand over care packages, waiting to be given some scrap of information about their loved ones.

Reverse the waters where they flow,

But cannot burst these ponderous bolts

That block us from the prison cells…

For some the wind can freshly blow,

For some the sunlight fade at ease,

But we, made partners in our dread,

Hear but the grating of the keys.*

Akhmatova was never herself convicted of any political crime, but she was banned from publishing and traveling for many years and lost her second husband, Nikolay Punin, to the camps in 1953. Her son, too, was arrested and she waited ten years for him to return from this archipelago of ghosts. One of her best friends, the poet Osip Mandelstam, perished in a transit camp in 1938 after being convicted of anti-Soviet propaganda. He had written a poem critical of Joseph Stalin.

Who will wait for Alyokina and Tolokonnikova to return? Husbands? Lovers? Children? Fellow reformers?

And how, one wonders, will these young women fare under the harsh conditions of a Russian prison camp? For they are town girls and will be incarcerated together with rough non-political prisoners who are not there because they sang a provocative song in the wrong place. They will be exposed to a difficult climate: terribly low temperatures in the winter, black clouds of mosquitoes and midges in the summer, in surroundings that are far from clean. Solzhenitsyn, Dostoyevsky and Shalamov survived their ordeal (though each had his health permanently impaired). Mandelstam, who was already ill, succumbed. Certainly, these women are young enough that they should be able to make it through, but nothing is certain.

Did they think it would come to this? Did they think Putin’s government would really do it? One wonders. Surely, they had to know it was a risk? But it was strange, the way they smiled, even smirked, in eerie serenity into the lenses of the international cameras. Did they think these images sent round the world would save them? Did they think that Putin would choke?

In any case, they now know the western press is fickle and its news cycle very short. The cameras they played to are gone and Madonna will not be coming for a visit. Now, they are alone with the hard reality of the collision of their choices with the might of the Russian government. And The New York Times and The BBC have gone on to other things.

What Makes Them Do IT?
Tags: books, celebrities, history, media, protest