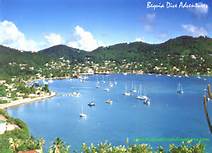 Christmas in the Caribbean

Christmas Eve in Bequia is a day of frenzied shopping, for unlike up in the States, no stores down here have “Christmas hours.” The only things open on Christmas Day are restaurants so the tourists can have something to eat, but otherwise Christmas is a day of family, church and rest.

So we went down to Port Elizabeth harbor on Christmas Eve to buy the Christmas essentials: a black and gold party dress, a novel about Jamaica and a few odds and ends from Doris’s.

Doris’s is a glorious place. It is grocery store, but it is much more than that. It is everything that those of us who suffer the soulless wastes of supermarket aisles back home could dream of. From the street Doris’s doesn’t even look like a store at all. It looks like somebody’s house. The only hint that it is not a residence is the diminutive sign Doris’s Fresh Food on the street fence and as you walk up the front path an Open sign on the main door. Inside, it is two cool, dark rooms crammed with stuffed, sagging and at first glance utterly chaotic shelves of everything you could ever possibly want to eat or drink.

Doris caters to the yacht crowds as well as the ex-pats who live on the island and so she carries a wide range of merchandize, both local and international. It is at Doris’s that I see food I haven’t seen since I lived in Germany, England or Sweden. It is at Doris’s that you can buy both Bequian breadfruit and blueberries flown in from the States, or find a $100 bottle of French champagne for Old Year’s Night and two shelves over a selection of home-made island guava jelly in an unmarked glass jar with a top made of foil secured only by a rubber band.

Doris herself is a Bequian of East Indian extraction who remembers everyone who comes into her store even if she hasn’t seen them in a year. She is a champion multi-tasker who can ring up your purchase on her ancient calculator, take a telephone order from a yacht sailing up from Grenada and call for her husband Owen to bring out more of the fresh pastries he made that morning all without forgetting to nod to new people coming in the front door or to shout out the price of a bag of raisins or an English Christmas pudding for a shopper in a back aisle.

Dorsi is everything that is good about this island: relaxed, friendly, trusting. Once when for some reason our credit card didn’t work, Doris told us to take the groceries and come back the next day with the money. We did.

So yesterday we left Doris’s with a baguette of fresh whole wheat bread Owen had just baked, a jar of that guava jelly from some woman up in the hills, fresh blueberries, island eggs and a bottle of white wine, all the essentials for the Christmas Eve feast.

Obviously, that wouldn’t be much of a Christmas Eve feast, would it? In fact, we and a group of nine friends were going up to Nando’s for Christmas Eve dinner.

Nando, like Doris, is another reason why people who come to Bequia return over and over again. Nando, a son of Bequia, left the island as a young man to work in a galley of a big international commercial vessel. When he returned after decades on the high seas, he had not only earned enough money to buy his own house, he had also learned how to cook.

Nando’s is without a doubt the best restaurant on the island and by that I do not mean the most expensive or the most stylish. In fact, Nando’s (the full name of his establishment in Fernando’s Hideaway) is merely the bottom terrace of Nando’s house with an open kitchen where through the unshuttered doors and windows you can watch Nando do the cooking and his nieces the washing up. Nando’s house is on a trace, as they are called here, which in this case is a steep, damp, slippery concrete road up which, if you are wearing anything more than the flattest of shoes, you need to be driven. There is no printed menu at Nando’s, but you usually have a choice of three things: one is the Snapper Nando caught that morning, for he is a fisherman by trade and family tradition, another is chicken in whatever sauce Nando feels like doing it that day and the third alternates back and forth between pork or lamb chops.

But the glory of Nando’s cooking is in his soups (Christmas Eve night he did a pumpkin ginger) and his sides. For no matter which of the three entrees you choose, the sides are the same exquisite little heaps of local greens, mashed gingered pumpkin, a sweet potato pancake, roast potatoes and eggplant salsa.

Nando’s can only sit about twenty-five, the tables are rugged, the chairs not particularly comfortable. Sand-filled bags of Bake Lite flour with small votive candles in them provide the table lights and there are a few nautical decorations hung in the trees. A simple place, not easy to get to, but we all come, and come again, on foot, by Jeep, by Mini-Moke, or taxi, for in addition to the food the establishment embodies the generous spirit of a man of humble beginnings who defined success his own way, a man who left and came home again, a man who has masterfully combined his knowledge of the world with the grace and charm of his local culture.

So we all sat there, ate and drank (Nando’s has a wine list, he’s a businessman after all) and listened to the rain thunder down upon the flat roof of Nando’s terrace, a rain such as I have never experienced and which people who have been here for years informed us they had also never seen before. The rain was joined by thunder, great crashing rumbles and flashes of lightning that lit up the dripping trees.

The thunder, lightning and rain (it is rare to have thunder and lightning in the Eastern Caribbean) went on for hours, past midnight and into Christmas morning. We all went home to stand out on our balconies shivering in the damp and watch the near constant lightning flashes lighting up the ocean, the hills of Bequia and the mother island of Saint Vincent to the north.

It was a night of portents, of mythic wonder. People were swept from the hillsides in Saint Vincent and it was hard not to wonder which particular example of human foolishness or greed had so displeased those in the skies above us.

Christmas Day dawned leaden and rainy as we all crept rather dazed from our various dwellings and sallied forth to wish each other a merry Christmas. But today, Boxing Day, it was as if none of it had ever happened. The seas were calm, the skies blue. Christmas in the Caribbean returned to normal: pan music and a fresh fish lunch, a walk in the surf with friends and a nap on the veranda looking out over Lower Bay, sails coming into harbor, the cries of children from the beach below, hummingbirds in the bougainvillea.