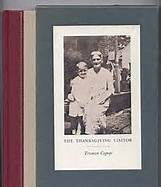 As we sit in front of the television watching football and trying to digest our Thanksgiving dinners, or attempt to work these dinners off by engaging in the extreme sport that is now called holiday shopping, I would like to suggest a more reflective (and less dangerous) way to enjoy the Thanksgiving holiday now past as well as the one that looms ever larger on the horizon. Do not trouble yourself over that mile-long Christmas gift list, the prospect of tedious holiday office parties or what is fast becoming a province of the super-rich, being able to afford the stamps for all the Christmas cards you need to send. Instead, may I suggest you read a story, a pair of them, actually, to put yourself into the holiday spirit and to remind yourself of what indeed both Thanksgiving and Christmas are supposed to be about in the first place.

Most people of a certain age (why, even my parents had it on their shelf) have read “In Cold Blood,” Capote’s treatment of the infamous 1959 Kansas murders. Others may also have read “Breakfast at Tiffany’s” (no it doesn’t count if you’ve seen the movie), but I’m sure many have not read the two stories listed above. They go together really. I read the Christmas story first and the Thanksgiving one after, but it doesn’t matter, for both books are about virtually the same thing: the love a young boy feels for his elderly spinster cousin, a woman considered by all who know her to be simple and child-like, in short, the perfect companion for a boy of seven years of age.

Truman Capote grew up in a small rural Depression-era town in Alabama. He was unathletic and introspective and hung around the kitchen of the house where his parents had sent him while they fought it out in the courts. His best friend was his cousin, a sixtyish spinster who had never traveled more than five miles from her home and her dog, Queenie, “a feisty little rat terrier.” The Christmas story actually begins in late November when his cousin (who in the story he always refers to as “my friend”) sniffs the air and announces it is time to bake the thirty Christmas fruit cakes they always bake together and send to people like the President of the United States or “a California couple whose car broke down outside the house and who spent a pleasant hour chatting with us on the porch.” The process of making the fruit cakes: the filling of a baby stroller with windfall pecans, the cracking of pecan shells by the kitchen firelight or the careful counting of money from “the Fruitcake Fund” kept in “an ancient bead purse under a loose board under the floor under the chamber pot under my friend’s bed” is all wonderful. The most wonderful scene, to my mind, however, is when the timid old woman and boy called Buddy go down to the local riverside “dancing café” to buy a quart of illegal whisky. The proprietor of this speakeasy, a scar-faced Indian everyone calls Haha because he’s always gloomy, watches the pair of them counting out their change from the bead purse and breaks out laughing.

“Which one of you is the drinking man?” he asks and then gives them the liquor for free on the promise that he’ll get one of the whisky fruitcakes for himself.

There is much else to delight the reader in this tale, the march through the woods to get a perfect Christmas tree, the making of ornaments with only scissors, crayons and stacks of colored paper, the secret construction of Christmas presents for one another (they both make each other a kite), but the most wonderful thing about the story is the sense you have throughout of being bathed in love, love of both place and the people who lived in that place, love of the small details that make life interesting, love of childhood.

It is a tale told from the perspective of time passed. It was, in fact, to be Capote’s last Christmas with his friend. As the story ends, he is left standing on a frozen school campus years later searching the cold December sky for a glimpse of the lost kites of his childhood.

“The Thanksgiving Visitor” also takes place in this house of Capote’s Alabama childhood when Buddy’s cousin insists he invite the class bully, Odd Henderson, (who torments him mercilessly in school) to Thanksgiving dinner. Buddy doesn’t want to, of course, and this most timid of women puts on her faded, flowered hat, a hand-me-down from some more assertive relation, and marches off to do the job for him.

She comes back from her meeting sad and wistful. Odd is indeed coming to dinner, but that is not what most concerns her. The house she has just come from was bone-cold in late November, its larder was bare, Odd’s mother (thirty-five with not a tooth left in her head, nine children to care for and her husband a guest of the state) had told her repeatedly what a wonderful boy Odd was, how he always helped with his younger brothers and sisters, how he sang like an angel.

Buddy’s friend is ashamed, ashamed that she has so much when there are people who have so little.

Odd comes to dinner and when a curious chance presents itself steals the spinster’s cameo brooch. Buddy, who sees Odd do it, accuses him across a groaning, relative-packed Thanksgiving dinner table. His cousin, humiliated not by Odd’s but by Buddy’s transgression of the laws of Southern hospitality, lies for Odd out of mixture of shame and forgiveness, perhaps, or downright goodness.

Later she explains to Buddy why what he did was far worse. Yes, Odd stole, but he hadn’t come into their house with this in mind (she was sure), while what Buddy had done was planned humiliation, deliberate cruelty and there was nothing worse than that.

Odd, who is twelve in second-grade, eventually drops out of school to work on a dairy farm. The last they hear of him some years later is that he’s gone to Mobile to join the Merchant Marine.

Both these stories are redolent with memories of a singular person who filled what might have been a miserable childhood with love and care and wonder. The descriptions are magical. Capote’s Depression-era Alabama reminds me of Nabokov’s Pre-Revolutionary Russia. It is a lost kingdom, a place full of things and people made remarkable by time and distance, a place never to be revisited. It was Capote’s first emotional landscape, a landscape that all the stories of socialites and murders he later wrote couldn’t touch for its truth and power. They are stories of giving and caring. They are stories of thanksgiving and the love and warmth of one human being for another. They are the best stories about Thanksgiving and Christmas that I have ever read.

← The Devil is in the Details
Christmas in the Caribbean →