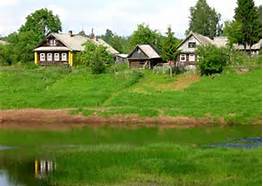 Crumbling provincial towns, the Gypsy wedding of a fourteen year old, the dismal condition of the M10 which connects Petersburg to Moscow, the gleaming domes of the Iversky Monastery across the lake from Putin’s country residence. The article  “The Russia Left Behind: A Journey Through the Heartland on a Slow Road to Ruin” by Ellen Barry ran in The New York Times this last Monday. It was an account of a road trip Ms. Barry recently undertook between the two great Russian cities of St. Petersburg and Moscow. Her article was written in the form of a series of vignettes about people she met in the towns and villages along the pockmarked highway that connects Putin’s hometown to the Russian capital. Her point, as I understood it, was the total disconnect between the oil and gas glory of Putin’s Russia as displayed in the shining Imperial facades of Petersburg and Moscow and the countryside between it where many Russians live.

A disconnect between the cities and the provinces, in Russia. Well…that is news.

A Journey from St. Petersburg to Moscow by Alexander Radishchev was published in Russia in 1790. Quite a famous book in Russian Literature, it’s an account of a road trip he took from St. Petersburg to Moscow in the late 1700’s. His book took the form of a series of vignettes about the people he met in towns and cities he traveled through. There was no mention of Alexander Radishchev in the Barry article, which I found incredible. If she used his idea, then please just say so. If she’s never heard of him, then I don’t think she did her homework properly.

Radishchev got exiled to Siberia for his travel book. Catherine the Great, you see, whose Russia it was back in 1790, didn’t appreciate people pointing out the disconnect between the enlightened life led in the capitals of her country and the misery or ignorance of the average Russian living out in the countryside. No doubt, Putin doesn’t appreciate it either, but then Barry, an American, has her protections. Radishchev, a Russian, had to face the music.

Barry described her journey very well (and the accompanying photographs are excellent), but the subtext of her article, that this neglect is something uniquely to do with the Putin regime, is entirely false.

There has always been a disconnect between life in the two great cities and “the res”t of Russia. It has been one of the great themes of both Russian literature and Russian social criticism for centuries. It is a real disconnect in time and space and in the minds of the Russians themselves. The provinces (as they are still called, just as they were in Catherine’s day) are looked down upon even by the people who live in them.

I remember when I went out to Russia in 1997. I remember what the Russians who had left Petersburg and Moscow to come to America said to me (with a great sniff) before I went.

Togliatti is a city of just under a million people situated 45 minutes away from Samara, a city of over one million. But it didn’t matter. It wasn’t either of the two capitals. That was all they needed to know.

There has always been a deep and fatal distrust in Russia between “the cultured capitals” and “the wild hinterlands,” hinterlands that do in fact have a history of rising from up from time to time with nasty consequences. Indeed, in Togliatti, one of the old local heroes was a man called Pugachev who led a provincial rebellion against Catherine in 1773-1775. It was crushed, of course, brutally and Pugachev was executed.

Barry’s article lacked historical context. The provinces have been left to their own devices for centuries by a long line of rulers, both autocratic and “enlightened.” They have never been as glitzy as the capitals, but neither are they as pathetic as Barry’s article would lead one to believe.

There is humor and beauty and some rather glorious nature in these miles and miles of countryside. There are cities of millions and people full of stories and laughter. I never regretted my time in the provinces, standing in the middle of a field on the old earthen wall Peter the Great built to hold back the Tartars, having tea in someone’s village dacha garden, picnicking with my students on the bluffs over the Volga.

The provinces have their points. Even if the roads which run through them could use some help.

“You know what we say, don’t you?” my hosts asked me as we bumped along the highway from Samara to Togliatti, “We have only two things in Russia: fools and bad roads.”

Translated: It’s a hard climate and a big country and a bad road in Russia is no one’s idea of news.

← The Girl in the Photo
The Devil is in the Details →